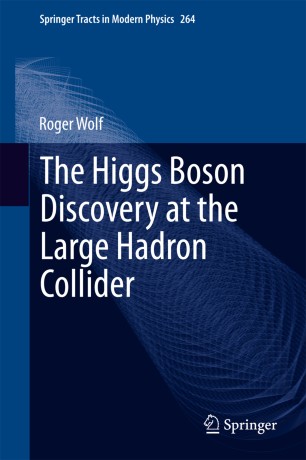 The Higgs Boson Discovery at the Large Hadron Collider

This book provides a comprehensive overview of the field of Higgs boson physics. It offers the first in-depth review of the complete results in connection with the discovery of the Higgs boson at CERN’s Large Hadron Collider and based on the full dataset for the years 2011 to 2012. The fundamental concepts and principles of Higgs physics are introduced and the important searches prior to the advent of the Large Hadron Collider are briefly summarized.

Lastly, the discovery and first mensuration of the observed particle in the course of the CMS experiment are discussed in detail and compared to the results obtained in the ATLAS experiment.

Roger Wolf studied physics at the Heidelberg University and received his PhD for the work on “Diffractive open charm production in deep-inelastic scattering and photo production at the HERA accelerator”, in 2006. From 2007 till 2010 he worked as a post-doctorate at the University of Hamburg, where he was involved in the first measurements with top quark pairs at the LHC.

For 2011 and 2012 he became fellow of the “Deutsche Forschungsgemeinschaft” (DFG) for scientific work abroad, affiliated to the Massachusetts Institute of Technology (MIT). He took actively part in the discovery of the Higgs boson. Since 2013 he is affiliated to the “Karlsruhe Institut für Technologie” (KIT) working on the mensuration of the Higgs sector in the context of the SM and on searches for additional Higgs bosons in the context of extensions of the SM. Since 2014 he is fellow of the “Eliteprogramm für Postdoktoranden” of the “Baden-Württemberg Stiftung."