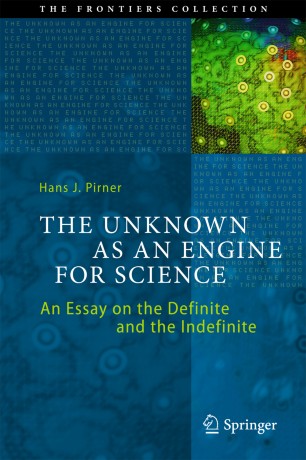 The Unknown as an Engine for Science

An Essay on the Definite and the Indefinite

This book explores the limits of our knowledge. The author shows how uncertainty and indefiniteness not only define the borders confining our understanding, but how they feed into the process of discovery and help to push back these borders. Starting with physics the author collects examples from economics, neurophysiology, history, ecology and philosophy.

The first part shows how information helps to reduce indefiniteness. Understanding rests on our ability to find the right context, in which we localize a problem as a point in a network of connections. New elements must be combined with the old parts of the existing complex knowledge system, in order to profit maximally from the information. An attempt is made to quantify the value of information by its ability to reduce indefiniteness.

The second part explains how to handle indefiniteness with methods from fuzzy logic, decision theory, hermeneutics and semiotics. It is not sufficient that the new element appears in an experiment, one also has to find a theoretical reason for its existence. Indefiniteness becomes an engine of science, which gives rise to new ideas.</p>

Hans J. Pirner is a theoretical physicist, who obtained his degree in the US. After working at the Niels Bohr Institute in Copenhagen, at CEA Saclay in Paris and at CERN in Geneva, he became professor of physics in Heidelberg in 1988 specializing in particle physics and nuclear physics. In the Marsilius-Kolleg, center of interdisciplinary research in Heidelberg, the problem of “vagueness” in analytic philosophy triggered his research of uncertainty at the edges of science.