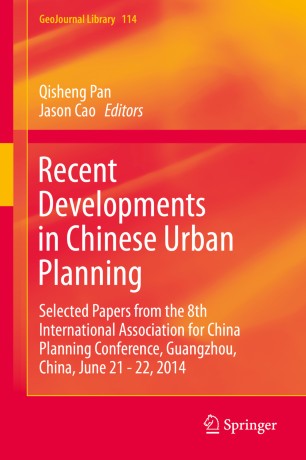 This book provides a comprehensive overview of the most recent development of Chinese cities. It discusses a broad range of subjects of urban planning, including environmental planning, transportation planning, historical preservation, economic development, geographic information systems (GIS) and other technological applications. China, the most populous country in the world, has experienced unprecedented urbanization in a relatively short period.

During the past decades, urbanization in China has centered on land development through industrialization and investment, but it has largely ignored the prosperity and well-being of the people. Livable cities are not just those with magnificent buildings and infrastructure; they are great places where people want to live. China’s recently inaugurated leaders have proposed a new model to actively and prudently enhance the quality of urbanization through compact, intelligent, and low-carbon development. It symbolizes the departure from land-centered urban development to a form of people-oriented urbanization, as China’s Premier, Li Keqiang, has advocated.

This new model offers a platform for planning researchers and practitioners to tackle urbanization challenges, such as social equity, environment, energy, ecological and historic preservation, affordable housing, and externalities of mega cities. Furthermore, people-oriented urbanization calls for public participation and stakeholder engagement in the planning process. This book brings together planners, designers, scholars, scientists, and government officials from China and all over the world to exchange ideas on urban regeneration.

Qisheng Pan is a Professor and Chair in the Department of Urban Planning and Environmental Policy at Texas Southern University.  Dr. Pan received a Ph.D. in Urban Planning from the University of Southern California (USC) in 2003 and a Master’s degree in Computer Science from USC in 2001. He also held a Master’s degree in Cartography and Remote Sensing and a BS in Geology from Peking University. Dr. Pan's research focuses on multiple aspects of urban planning, including transportation planning, economic impact analysis, and the applications of GIS in urban planning. He has received research grants from Texas Department of Transportation (TXDOT) to measure access to public transit services and to examine port-related traffic and emissions. He has also studied on the economic impacts of terrorist attacks on Central Business Districts and infrastructures in large metropolitan areas. Recently he received the Natural Resources Imagery Grant from ESRI to utilize SAR imagery technology in pipeline integrity management. Dr. Pan has consulted in multiple research projects from National Science Foundation’s Digital Government Program and Department of Homeland Security. Dr. Pan is serving as the Chair of the Board of Directors (BOD) for the International Association for China Planning (IACP), 2013-2015.

Dr. Cao is an associate professor of the Humphrey School of Public Affairs at the University of Minnesota, Twin Cities.  He is internationally well-known for his research on the relationships between the built environment and travel behavior, particularly the role of residential self-selection.  His research interests also include the impacts of telecommunications on travel, and quality of life.   Dr. Cao is the vice Chair of International Association for China Planning for 2013-2015, a board member of World Society for Transport and Land Use Research for 2011-2014, an invited member of TRB committees (ADB 10 and 20).  He serves on the editorial boards of Transportation, Environment and Behavior, and Travel Behavior and Society. He received his degrees from Tsinghua University and University of California, Davis.