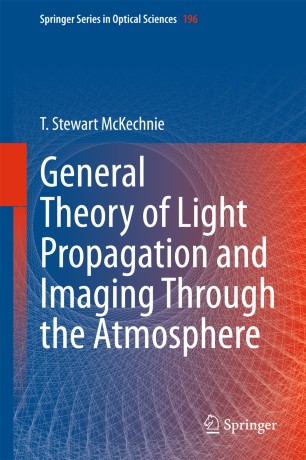 General Theory of Light Propagation and Imaging Through the Atmosphere

This book lays out a new, general theory of light propagation and imaging through Earth’s turbulent atmosphere. Current theory is based on the – now widely doubted – assumption of Kolmogorov turbulence. The new theory is based on a generalized atmosphere, the turbulence characteristics of which can be established, as needed, from readily measurable properties of point-object, or star, images.
The pessimistic resolution predictions of Kolmogorov theory led to lax optical tolerance prescriptions for large ground-based astronomical telescopes which were widely adhered to in the 1970s and 1980s. Around 1990, however, it became clear that much better resolution was actually possible, and Kolmogorov tolerance prescriptions were promptly abandoned. Most large telescopes built before 1990 have had their optics upgraded (e.g., the UKIRT instrument) and now achieve, without adaptive optics (AO), almost an order of magnitude better resolution than before.
As well as providing a more comprehensive and precise understanding of imaging through the atmosphere with large telescopes (both with and without AO), the new general theory also finds applications in the areas of laser communications and high-energy laser beam propagation.