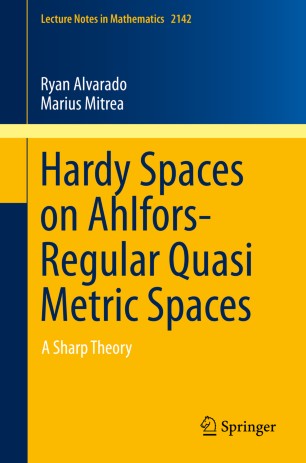 Systematically building an optimal theory, this monograph develops and explores several approaches to Hardy spaces in the setting of Ahlfors-regular quasi-metric spaces. The text is broadly divided into two main parts. The first part gives atomic, molecular, and grand maximal function characterizations of Hardy spaces and formulates sharp versions of basic analytical tools for quasi-metric spaces, such as a Lebesgue differentiation theorem with minimal demands on the underlying measure, a maximally smooth approximation to the identity and a Calderon-Zygmund decomposition for distributions. These results are of independent interest. The second part establishes very general criteria guaranteeing that a linear operator acts continuously from a Hardy space into a topological vector space, emphasizing the role of the action of the operator on atoms. Applications include the solvability of the Dirichlet problem for elliptic systems in the upper-half space with boundary data from Hardy spaces. The tools established in the first part are then used to develop a sharp theory of Besov and Triebel-Lizorkin spaces in Ahlfors-regular quasi-metric spaces. The monograph is largely self-contained and is intended for an audience of mathematicians, graduate students and professionals with a mathematical background who are interested in the interplay between analysis and geometry.