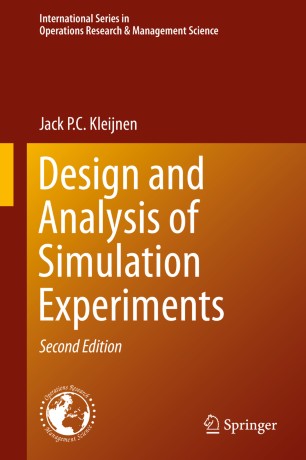 Design and Analysis of Simulation Experiments

This is a new edition of Kleijnen’s advanced expository book on statistical methods for the Design and Analysis of Simulation Experiments (DASE).  Altogether, this new edition has approximately 50% new material not in the original book.  More specifically, the author has made significant changes to the book’s organization, including placing the chapter on Screening Designs immediately after the chapters on Classic Designs, and reversing the order of the chapters on Simulation Optimization and Kriging Metamodels.  The latter two chapters reflect how active the research has been in these areas.

The validation section has been moved into the chapter on Classic Assumptions versus Simulation Practice, and the chapter on Screening now has  a section on selecting the number of replications in sequential bifurcation through Wald’s sequential probability ration test, as well as a section on sequential bifurcation for multiple types of simulation responses.  Whereas all references in the original edition were placed at the end of the book, in this edition references are placed at the end of each chapter.

From Reviews of the First Edition:

“Jack Kleijnen has once again produced a cutting-edge approach to the design and analysis of simulation experiments.”  (William E. BILES, JASA, June 2009, Vol. 104, No. 486)

Jack P.C. KLEIJNEN is Emeritus Professor of “Simulation and Information Systems” at Tilburg University, where he is still an active member of both the “Department of Management” and the “Operations Research Group” of the “Center for Economic Research (CentER)” in the Tilburg School of Economics and Management. His research concerns the statistical design and analysis of experiments with simulation models, in many scientific disciplines including management science, operations research, and engineering. He was a consultant for several organizations in the USA and Europe, and served on many international editorial boards and scientific committees. He also spent several years in the USA, at universities and private companies. He received a number of national and international awards; e.g., in 2008 the Queen of the Netherlands appointed him a Knight in the “Order of the Netherlands Lion” and in 2005 the INFORMS Simulation Society awarded him the “Lifetime Professional Achievement Award” (LPAA).  While being an Emeritus Professor, he wrote the second version of “Design and analysis of simulation experiments”, and in 2015 he supervised his last Ph.D. student Ehsan Mehdad.

Review of the 1st Edition: