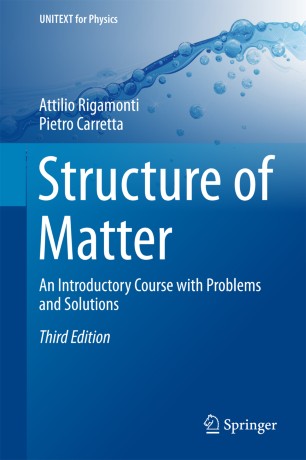 An Introductory Course with Problems and Solutions

This textbook, now in its third edition, provides a formative introduction to the structure of matter that will serve as a sound basis for students proceeding to more complex courses, thus bridging the gap between elementary physics and topics pertaining to research activities. The focus is deliberately limited to key concepts of atoms, molecules and solids, examining the basic structural aspects without paying detailed attention to the related properties. For many topics the aim has been to start from the beginning and to guide the reader to the threshold of advanced research. This edition includes four new chapters dealing with relevant phases of solid matter (magnetic, electric and superconductive) and the related phase transitions. The book is based on a mixture of theory and solved problems that are integrated into the formal presentation of the arguments. Readers will find it invaluable in enabling them to acquire basic knowledge in the wide and wonderful field of condensed matter and to understand how phenomenological properties originate from the microscopic, quantum features of nature.

Pietro Carretta is Associate Professor of Condensed Matter Physics at the University of Pavia. He is a member of the CNISM (Consorzio Nazionale Interuniversitario per le Scienze Fisiche della Materia) Scientific Committee and from 2011 to 2013 was vice-president of AIMagn (Italian Magnetism Society). Dr. Carretta is a reviewer for several international journals and has worked as an expert for AERES (Agence d’évaluation de la recherche et de l’enseignement supérieur). He has coordinated several national projects and promoted research programs such as the ESF Program on Highly Frustrated Magnetism. His research activity has focused especially on the experimental study of the physical properties of matter by combining magnetic resonance techniques, mainly NMR and μSR, with techniques of complementary character such as magnetization and specific heat measurements.

Attilio Rigamonti is Emeritus Professor of the University of Pavia, Italy, having first been appointed full professor of Structure of Matter at the university in 1976. He is a former Director of the Institute of Physics and first Director of the Department of Physics “A.Volta” at the University of Pavia (1981-1985) and served as First Director of the Graduate School in Science and Technologies (2006-2009). Professor Rigamonti has given courses, lectures and seminars at many Universities in Europe and the United States. He has supervised international research projects and has been a member of academies and various scientific committees. He was a member of the advisory board of the Groupement AMPERE for two decades and of the MECO organization from 1971 to 2005 and was chairman of the program committee for CIMTEC in 2006 and 2010. He was a member of the editorial board of the Journal of Magnetic Resonance from 1978 to 1993 and is the author of more than 210 scientific papers in the most important journals and of textbooks. Rigamonti is presently a member of the Istituto Lombardo, Academy of Sciences and Letters.