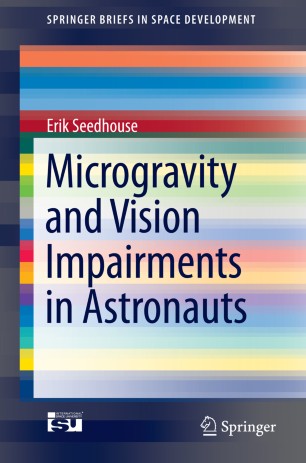 Microgravity and Vision Impairments in Astronauts

Recent missions on board the International Space Station have revealed previously unreported physiological consequences of long duration space flight, particularly in eyesight, and in this Brief Dr. Seedhouse reviews the existing theories on what causes this degeneration and how long it will last. Notably, 60% of long-duration crews have reported subjective degradation in vision, a clear indication that further study is necessary before astronauts embark on even longer-term space missions. Decreased near-visual acuity was reported in 46% of ISS/Mir crewmembers, resulting in a change of up to 2 dioptres in their refractive correction. It is possible that ophthalmic changes have been present since the first days of spaceflight, but had been attributed to other causes; this approach to the issue as well as other hypotheses are all presented in full to give a broad foundation of the existing knowledge on the topic.  The changes have occurred at various times during a mission with varying degrees of visual degradation. Some cases resolved on return to Earth, but several crewmembers have not regained pre-flight visual acuity, indicating the damage may be permanent. One explanation of the syndrome has been attributed to hyperopic shift due to aging, but onboard analysis techniques, including visual acuity assessments, retinal imagery, and ultrasound examination of the eye, has led to the acceptance of a wider syndrome. In addition to vision changes, studies have reported flattening of the globe, swelling of the optic disc (papilledema), choroidal folds in the retina, swelling of the optic nerve sheath, and visual field defects. It is widely hypothesized that this spectrum of symptoms may be explained by an elevation of intracranial pressure (ICP). Establishing the provenance of this medical problem, monitoring its occurrence and resolving the symptoms for future long term space missions is a key challenge for space medicine. With this book, readers have an entry point for understanding the full scope of the problem and its possible origins.