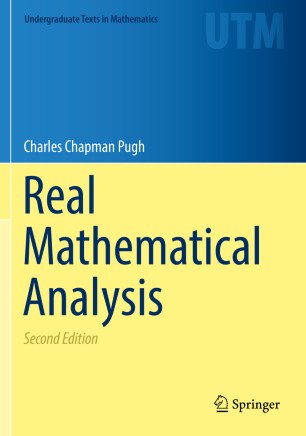 Based on an honors course taught by the author at UC Berkeley, this introduction to undergraduate real analysis gives a different emphasis by stressing the importance of pictures and hard problems. Topics include: a natural construction of the real numbers, four-dimensional visualization, basic point-set topology, function spaces, multivariable calculus via differential forms (leading to a simple proof of the Brouwer Fixed Point Theorem), and a pictorial treatment of Lebesgue theory. Over 150 detailed illustrations elucidate abstract concepts and salient points in proofs. The exposition is informal and relaxed, with many helpful asides, examples, some jokes, and occasional comments from mathematicians, such as Littlewood, Dieudonné, and Osserman. This book thus succeeds in being more comprehensive, more comprehensible, and more enjoyable, than standard introductions to analysis.

New to the second edition of Real Mathematical Analysis is a presentation of Lebesgue integration done almost entirely using the undergraph approach of Burkill. Payoffs include: concise picture proofs of the Monotone and Dominated Convergence Theorems, a one-line/one-picture proof of Fubini's theorem from Cavalieri’s Principle, and, in many cases, the ability to see an integral result from measure theory. The presentation includes Vitali’s Covering Lemma, density points — which are rarely treated in books at this level — and the almost everywhere differentiability of monotone functions. Several new exercises now join a collection of over 500 exercises that pose interesting challenges and introduce special topics to the student keen on mastering this beautiful subject.

Charles C. Pugh is Professor Emeritus at the University of California, Berkeley. His research interests include geometry and topology, dynamical systems, and normal hyperbolicity.