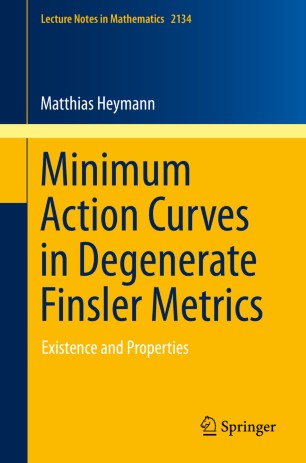 Presenting a study of geometric action functionals (i.e., non-negative functionals on the space of unparameterized oriented rectifiable curves), this monograph focuses on the subclass of those functionals whose local action is a degenerate type of Finsler metric that may vanish in certain directions, allowing for curves with positive Euclidean length but with zero action. For such functionals, criteria are developed under which there exists a minimum action curve leading from one given set to another. Then the properties of this curve are studied, and the non-existence of minimizers is established in some settings.

Applied to a geometric reformulation of the quasipotential of Wentzell-Freidlin theory (a subfield of large deviation theory), these results can yield the existence and properties of maximum likelihood transition curves between two metastable states in a stochastic process with small noise.

The book assumes only standard knowledge in graduate-level analysis; all higher-level mathematical concepts are introduced along the way.