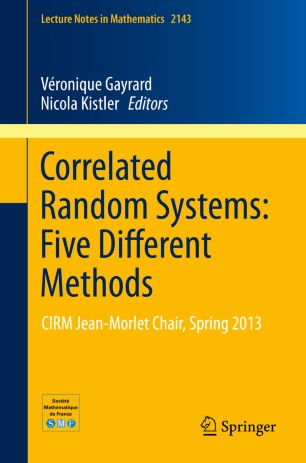 This volume presents five different methods recently developed to tackle the large scale behavior of highly correlated random systems, such as spin glasses, random polymers, local times and loop soups and random matrices. These methods, presented in a series of lectures delivered within the Jean-Morlet initiative (Spring 2013), play a fundamental role in the current development of probability theory and statistical mechanics. The lectures were: Random Polymers by E. Bolthausen, Spontaneous Replica Symmetry Breaking and Interpolation Methods by F. Guerra, Derrida's Random Energy Models by N. Kistler, Isomorphism Theorems by J. Rosen and Spectral Properties of Wigner Matrices by B. Schlein.

This book is the first in a co-edition between the Jean-Morlet Chair at CIRM and the Springer Lecture Notes in Mathematics which aims to collect together courses and lectures on cutting-edge subjects given during the term of the Jean-Morlet Chair, as well as new material produced in its wake. It is targeted at researchers, in particular PhD students and postdocs, working in probability theory and statistical physics.