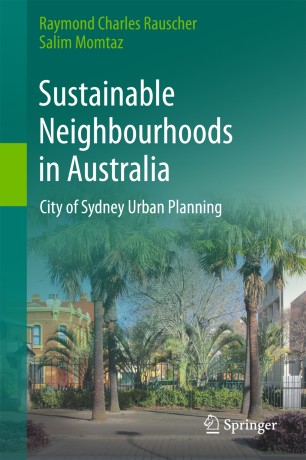 This book examines the planning and implementation of policies to create sustainable neighborhoods, using as a case study the City of Sydney. The authors ask whether many past planning and development practices were appropriate to the ways that communities then functioned, and what lessons we have learned. The aim is to illustrate the many variations within a city and from neighborhood to neighborhood regarding renewal (rehabilitation), redevelopment (replacement) and new development.

Case study examples of nine City of Sydney neighborhoods note the different histories of planning and development in each. Features of the studies include literature searches, field work (with photography), and analysis. The authors propose a set of sustainability principles which incorporate elements of the twenty seven principles of the 1992 Rio Declaration on Environment and Development

Part One explores sustainable urban planning, and the importance of planning tools that enable best planning outcomes for communities and investors. Common factors in the nine case study neighborhoods are renewal, redevelopment and development pressures affecting Sydney from the 1970s to 2014. Also discussed are the differing circumstances of planning faced by authorities, developers and communities in each of the study areas.

Inner South area: Chippendale, Redfern and Waterloo District. Part Four surveys the Inner West suburb of Erskineville. Part Five looks at the City West area, including the Haymarket District and the Pyrmont and Ultimo District. Part Six concentrates on the North West area suburb of Glebe. Part Seven of the book looks at the growth area of South Sydney District, which includes the suburbs of Beaconsfield, Zetland and the new localities of Victoria Park and Green Square. The authors recount lessons learned and outline directions of planning for sustainable neighborhoods. Finally, the authors challenge readers to apply the lessons of these case studies to further advances in sustainable urban planning.

I have always been interested in town planning, being born in Brooklyn, New York City (1943) and graduating from the City College of New York (Bachelor of Engineering, Civil 1966). I later completed a first part of a masters degree at the Univ of Michigan (research submission on Detroit entitled A Solution to the Urban Crisis: Proposal for the Creation of Region Serving New Cities (unpublished 1969). The Masters of Town and Country Planning was completed at Sydney University (1971) with a thesis Community Response to a Redevelopment Proposal (University of Sydney Library Microfilm Dept). The thesis covered planning conflicts in Erskineville and measures to resolving these. Chapter 7 of this book refers back to the planning of Erskineville in 1971, and lessons learned. Delving  into the subject of sustainable urban planning, I completed a PhD (2009) at the University of Newcastle, including the thesis Sustainable Area Planning Framework for Ecologically Sustainable Development: Case Study Wyong Shire, NSW, Australia.

Wanting to research further the subject of sustainable urban planning, I published (with co-author Salim Momtaz) Sustainable Communities: A Framework for Planning - Case Study of an Australian Outer Sydney Growth Area (Springer 2014). Over the years I continued to study urban change in my birth place Brooklyn (New York). My interest was drawn to Bushwick (my old neighborhood), an area of Brooklyn that met its low point of ur

ban slide in the 1977 arson fires. I did field work over several years, from 1979 onwards, to better understand reasons for USA style urban decline and renewal. This culminated in the book (with co-author Salim Momtaz) Brooklyn's Bushwick - Urban Renewal in New York, USA (Springer 2014).

Still wanting to understand the urban changes in inner city neighbourhoods (beyond Erskineville of 1971), I continued (over a number of years) to monitor planning and development of the City of Sydney inner city areas. This monitoring focused on the question of how sustainable were the urban changes taking place in these Sydney neighbourhoods (given the rapid growth of Sydney into a global city). To prepare this book I spent five years (2009-2014) on the ground in the inner city of Sydney doing qualitative research field work, including photographing changes in City of Sydney neighbourhoods. During this research I recalled my involvement with community groups at the time of my earlier research in Erskineville noted above. At the time (1971-1973), neighbourhood associations were successful in calling on the New South Wales (NSW) Builders Labourers' Federation (BLF) to impose 'green bans' to stop NSW State or developer proposed developments which residents felt were inappropriate. This led to a number of 'green bans' imposed in inner city communities covered in this book, including Woolloomooloo (Chapter 3), Victoria St, Kings Cross (Chapter 4), Waterloo (Chapter 6), and Glebe (Chapter 10).

Since 1973 I have been a member of the Australian based Social Developers Network (SDN) The Network commenced at the time of PM Gough Whitlam (1972-1975) (currently 98 years old, living in Sydney). As prime minister Whitlam (and Minister for Planning and Regional Development, Tom Uren) promoted and instituted programs in urban planning, regional development and community development. A number of those initiatives are included in the book (Woolloomooloo in Chapter 3, Kings Cross in Chapter 4, and Glebe in Chapter 9). I am currently a Conjoint Lecturer at the University of Newcastle, Australia. I am also a director of Habitat Association for Arts and Environment Inc. Under this body I continue to work on 'Visions Inner Sydney' (VIS). This is a program recording the changes in the inner city local government areas of the City of Sydney, and Municipalities of Leichhardt, Marrickville and Ashfield.

Dr Salim Momtaz is a senior lecturer at the University of Newcastle, Australia. He teaches in the area of sustainable resource management. A geographer, environmental scientist and social planner by training, Salim’s research interests include: environmental planning and governance, social adaptation to climate change, impact assessment and community participation. His recent publications include: Evaluating Environmental and Social Impact Assessment in Developing Countries, Elsevier: Oxford (2013) (co-author S.M.Z. Kabir); Sustainable Communities: A

“This book is not only well presented but it is interesting for the thoroughness of content about the City of Sydney, all of which will assist readers to become very familiar with the city … . graphics and images in this book are very interesting and helpful, contributing well to the content. This book will be useful for understanding Sydney, Australia but also very useful to those considering to evalaute any other city around the world on a neighbourhood basis.” (Jeff Thurston, 3D Visualization World Magazine, 3dvisworld.com, June, 2015)