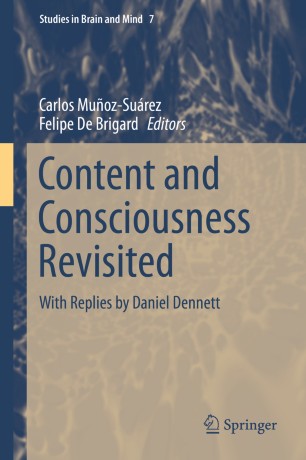 With Replies by Daniel Dennett

Part of the Studies in Brain and Mind book series (SIBM, volume 7)

What are the grounds for the distinction between the mental and the physical? What is it the relation between ascribing mental states to an organism and understanding its behavior? Are animals and complex systems vehicles of inner evolutionary environments? Is there a difference between personal and sub-personal level processes in the brain? Answers to these and other questions were developed in Daniel Dennett’s first book, Content and Consciousness (1969), where he sketched a unified theoretical framework for views that are now considered foundational in cognitive science and philosophy of mind.

Content and Consciousness Revisited is devoted to reconsider the ideas and ideals introduced in Dennett’s seminal book, by covering its fundamental concepts, hypotheses and approaches, and taking into account the findings and progress which have taken place during more than four decades. This book includes original and critical contributions about the relations between science and philosophy, the personal/sub-personal level distinction, intelligence, learning, intentionality, rationality, propositional attitudes, among other issues of scientific and philosophical interest. Each chapter embraces an updated approach to several disciplines, like cognitive science, cognitive psychology, philosophy of mind, and cognitive psychiatry.

“The essays in the volume are clearly written and largely offer constructive criticism and friendly amendments. Dennett's replies are personable and supportive and for the most part informative. Overall I enjoyed reading the book (and re-reading Consciousness and Content while I awaited the book) and I learned a lot from the various exchanges. … it is nice to see Dennett's ideas being explored, refined, and connected to contemporary interdisciplinary endeavors in the cognitive sciences, including by Dennett himself!” (Richard Brown, Notre Dame Philosophical Reviews, ndpr.nd.edu, April, 2016)

“This book is well written, is authoritative, and makes an insightful contribution to the field. … This book is essential reading for the modern student and academic interested in both the scientific and philosophical aspects of brain in producing mind and for those looking for a detailed in-depth collective work on the core aspects of Dennett’s ideas. … I would recommend this book without hesitation to seasoned students and professional academics as an essential contribution to their ever-growing library.” (Jason J. Braithwaite, PsycCRITIQUES, Vol. 61 (7), February, 2016)