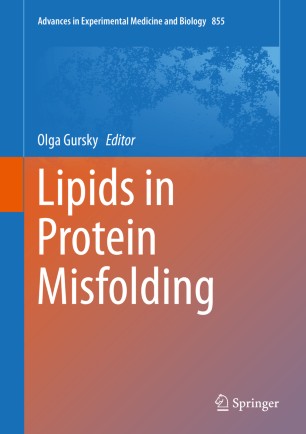 Part of the Advances in Experimental Medicine and Biology book series (AEMB, volume 855)

This book addresses molecular mechanisms of protein misfolding and the role of lipids and related molecules in these complex processes. The focus is on the biophysical and structural studies of proteins that are involved in major human disorders such as Alzheimer’s disease, systemic amyloidoses, diabetes II, inflammation and atherosclerosis. Misfolding often results from protein mutations or modifications. Misfolding of membrane proteins can cause topological changes that target the proteins for degradation. Misfolding of soluble globular proteins and peptides converts them into β-sheet-rich aggregates and amyloid fibrils. This process can disrupt the structural integrity of the lipid membranes and thereby contribute to amyloid toxicity. In turn, lipids and lipid-associated molecules such as apolipoproteins and heparan sulfate proteoglycans, which are ubiquitous constituents of amyloid plaques, can influence protein misfolding via diverse mechanisms that are addressed in this book.

The book features chapters describing the role of lipids in the misfolding of a wide range of proteins, including small peptides, globular proteins, lipid surface-binding proteins, and integral membrane proteins. The role of individual lipid molecules, lipid surfaces, and the membrane field is addressed, including specific and non-specific interactions with protein oligomers and mature fibrils. Distinct effects of various lipids on the nucleation and growth of amyloid fibrils are discussed. Modern computational approaches to the analysis of amyloid formation are addressed.  The book should be useful to experts in the field but is also accessible to novices.