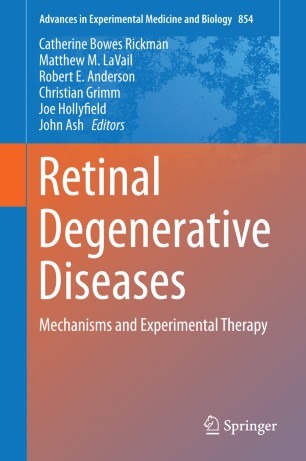 Part of the Advances in Experimental Medicine and Biology book series (AEMB, volume 854)

Contains the proceedings of the XVI International Symposium on Retinal Degeneration (RD2014), held July 13-18, 2014 at the Asilomar Conference Center in Pacific Grove, California. A majority of those who spoke and presented posters at the meeting contributed to this volume. The Symposium addressed the blinding diseases of inherited retinal degenerations, which have no effective treatments, and age-related macular degeneration, which has no cures, despite the fact that it is an epidemic among the elderly, with 1 in 3-4 affected by the age of 75. The RD2014 Symposium focused on the exciting new developments aimed at understanding these diseases and providing therapies for them.

The volume presents representative state-of-the-art research in almost all areas of retinal degenerations, ranging from cytopathologic, physiologic, diagnostic and clinical aspects; animal models; mechanisms of cell death; molecular genetics; and developing potential therapeutic measures such as gene therapy and neuroprotective agents for potential pharmaceutical therapy; and several sight restoration approaches, including optogenetics. While advances in these areas of retinal degenerations are included, several new topics either were in their infancy or did not exist at the time of the last RD Symposium, RD2012. These include many new developments in sight restoration using optogenetics, retinal or RPE cell transplantation, stem cell approaches and visual prosthetic devices. In addition, major advances are presented in other basic mechanisms in age-related macular degeneration, several new aspects of gene and antioxidant therapy, and revolutionary new imaging and functional testing that will have a huge impact on the diagnosis and following the course of retinal degenerations, as well as to provide new quantitative endpoints for clinical trials. The retina is an approachable part of the central nervous system (CNS), and there is a major interest in neuroprotective and gene therapy for CNS diseases and neurodegenerations, in general. It should be noted that with successful and exciting initial clinical trials in neuroprotective and gene therapy, including the restoration of sight in blind children, the retinal degeneration therapies are leading the way towards new therapeutic measures for neurodegenerations of the CNS. Many of the successes recently reported in these areas of retinal degeneration sprang from collaborations established at previous RD Symposia, and many of those are reported at the RD2014 meeting and included in this volume.

“Edited by half a dozen experts, this scientific compendium covers experimental and research topics that happen behind the scenes in the ophthalmology world. … This book is intended for full-time retinal researchers, or clinicians participating in clinical trials who want more insight into retinal research.” (EuroTimes, March, 2017)
Buy options