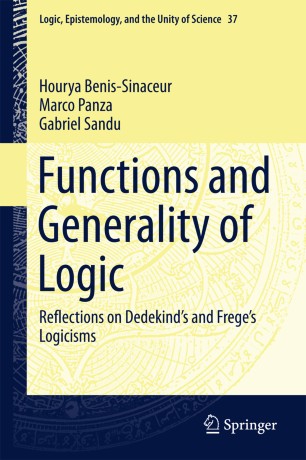 Functions and Generality of Logic

Reflections on Dedekind's and Frege's Logicisms

Part of the Logic, Epistemology, and the Unity of Science book series (LEUS, volume 37)

This book examines three connected aspects of Frege’s logicism: the differences between Dedekind’s and Frege’s interpretation of the term ‘logic’ and related terms and reflects on Frege’s notion of function, comparing its understanding and the role it played in Frege’s and Lagrange’s foundational programs. It concludes with an examination of the notion of arbitrary function, taking into account Frege’s, Ramsey’s and Russell’s view on the subject. Composed of three chapters, this book sheds light on important aspects of Dedekind’s and Frege’s logicisms. The first chapter explains how, although he shares Frege’s aim at substituting logical standards of rigor to intuitive imports from spatio-temporal experience into the deductive presentation of arithmetic, Dedekind had a different goal and used or invented different tools. The chapter highlights basic dissimilarities between Dedekind’s and Frege’s actual ways of doing and thinking. The second chapter reflects on Frege’s notion of a function, in comparison with the notions endorsed by Lagrange and the followers of the program of arithmetization of analysis. It remarks that the foundational programs pursued by Lagrange  and Frege are crucially different and based on a different idea of what the foundations of mathematics should be like. However, despite this contrast, the notion of function plays similar roles in the two programs, and this chapter emphasizes the similarities. The third chapter traces the development of thinking about Frege’s program in the foundations of mathematics, and includes comparisons of Frege’s, Russell’s and Ramsey’s views. The chapter discusses earlier papers written by Hintikka, Sandu, Demopoulos and Trueman. Although the chapter’s main focus is on the notion of arbitrary correlation, it starts out by discussing some aspects of the connection between this notion and Dedekind Theorem.