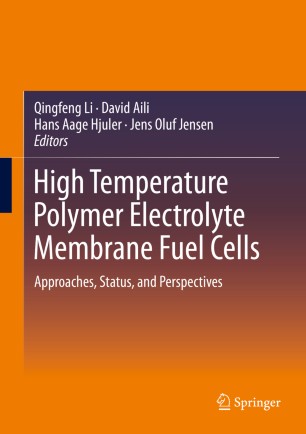 This book is a comprehensive review of high-temperature polymer electrolyte membrane fuel cells (PEMFCs).  PEMFCs are the preferred fuel cells for a variety of applications such as automobiles, cogeneration of heat and power units, emergency power, and portable electronics. The first 5 chapters of the book describe rationalization and illustration of approaches to high temperature PEM systems. Chapters 6 - 13 are devoted to fabrication, optimization and characterization of phosphoric acid-doped polybenzimidazole membranes, the very first electrolyte system that has demonstrated the concept of and motivated extensive research activity in the field. The last 11 chapters summarize the state-of-the-art of technological development of high temperature-PEMFCs based on acid doped PBI membranes including catalysts, electrodes, MEAs, bipolar plates, modelling, stacking, diagnostics and applications.

Qingfeng Li is a professor at Department of Energy Conversion and Storage, Technical University of Denmark. His research areas include proton conducting electrolytes, electrocatalysts and the related technologies particularly fuel cells and electrolysers. He received his Ph.D. in electrochemistry from Northeastern University, China, in 1990 and was awarded Doctor Degree of Technices at DTU in 2006. As a postdoc he started in the middle of 1990´s the research on high temperature polymer electrolyte membrane fuel cells at DTU. He has participated/coordinated more than 20 EU and Nordic research projects within the fuel cell area and is currently the leader of 4M Centre devoted to fundamental research on mechanisms, materials, manufacturing and management of high temperature polymer electrolyte membrane fuel cells, funded by the Danish Council for Strategic Research. He is an active member of, among other, the Electrochemical Society and the International Society of Electrochemistry (and currently the region representative of Denmark 2012-now). Prof. Li has been involved in teaching at all DTU levels including a lecturing and an experimental course on Hydrogen Energy and Fuel cells.

David Aili obtained his MSc degree in Organic Chemistry in 2007 from the Institute of Technology at Linköping University after a diploma project at the Arrhenius Laboratory, Stockholm University. He subsequently moved to Technical University of Denmark to pursue a PhD in the field of proton conducting membranes for electrochemical energy conversion technologies under the supervision of Professor Niels Bjerrum at the Department of Chemistry. After obtaining his PhD degree in 2011 and after a shorter period as a development engineer in the in the phenolic resin business, he joined the newly formed Department of Energy Conversion and Storage at Technical University of Denmark in 2012 as a Postdoctoral Research Fellow. His current research covers fundamental and application-oriented aspects of ion conducting materials with special emphasis on polymer-based membranes.

Hans Aage Hjuler was educated as MSc (Chemistry) at the Technical University of Denmark in 1980. In 1983 he obtained his PhD degree in Advanced Rechargeable Batteries at the Technical University of Denmark. As post-doc he formed a significant research group in batteries (from 1983) and fuel cells R&D (from 1988). He has worked with PAFC, MCFC, SOFC and PEM-based fuel cell systems and materials. He worked as laboratory manager with superconducting materials (high Tc) at NKT Research Center from 1991-94. He was director in Novo Nordisk from 1998-2009. He was one of the founders of Danish Power Systems in 1994 and chairman from 1994-2010. He was appointed Managing Director, CEO in 2010. HAH is vice-chair of the Board of Directors of the Danish Partnership for Hydrogen and Fuel Cells, member of Annex 22, International Energy Agency (IEA) Implementing Agreement on Advanced Fuel Cells. He is member of the Scientific Committee of Fuel Cell and Hydrogen Joint Undertaking (FCH-JU), European Commission, Brussels, Belgium.

Jens Oluf Jensen is a full Professor at Technical University of Denmark where he is heading the section named Proton Conductors (ca. 25 people) at Department of Energy Conversion and Storage. He is the coordinator of the technology tracks for PEM fuel cells and for low temperature electrolyzers at the department. In 1997, he received his PhD for a study on metal hydrides for batteries. Today his research fields include high temperature PEM fuel cells and alkaline electrolyzers. The approach is experimental and focused on materials like electrolytes, catalysts and electrode structures. He has initiated and coordinated numerous national and international research projects, mostly in collaboration with industry, and arranged a number of symposia/workshops. Lately he chaired the third International Carisma Conference in Copenhagen 2012 and the Danish Korean PEM Fuel cell workshop in Seoul 2013. He is a board member of the Partnership for Hydrogen and Fuel cells in Denmark. At DTU, he has taught at numerous courses and is at present involved in teaching hydrogen energy and fuel cells as well as thermodynamics.