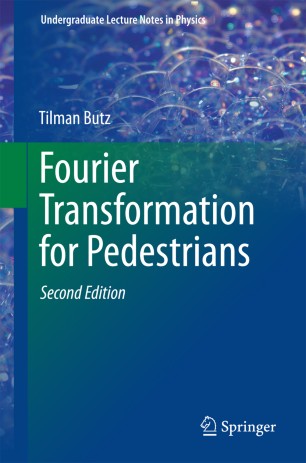 This book is an introduction to Fourier Transformation with a focus on signal analysis, based on the first edition. It is well suited for undergraduate students in physics, mathematics, electronic engineering as well as for scientists in research and development. It gives illustrations and recommendations when using existing Fourier programs and thus helps to avoid frustrations. Moreover, it is entertaining and you will learn a lot unconsciously. Fourier series as well as continuous and discrete Fourier transformation are discussed with particular emphasis on window functions. Filter effects of digital data processing are illustrated. Two new chapters are devoted to modern applications. The first deals with data streams and fractional delays and the second with the back-projection of filtered projections in tomography. There are many figures and mostly easy to solve exercises with solutions.

Prof. Dr. rer. nat. habil. Tilman Butz studied Physics at the Technical University of Munich, Germany, where he received the doctors degree and habilitated in Experimental Physics. He was a Heisenberg Fellow. He was appointed to the Professorship in Experimental Physics at the University of Leipzig, Germany, in 1993 and headed the accelerator laboratory LIPSION until his retirement in 2011. His expertise is in Nuclear Solid State Physics with focus on Nuclear Spectroscopy and Nuclear Microprobes addressing a broad range of fields in materials and life sciences. He was engaged in Academic Self-Administration as Vice-Dean, Dean, and Vice-Rector for Research.