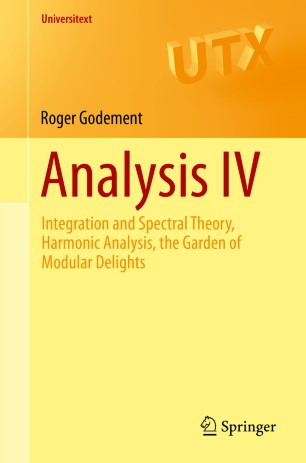 Analysis Volume IV introduces the reader to functional analysis (integration, Hilbert spaces, harmonic analysis in group theory) and to the methods of the theory of modular functions (theta and L series, elliptic functions, use of the Lie algebra of SL2). As in volumes I to III, the inimitable style of the author is recognizable here too, not only because of his refusal to write in the compact style used nowadays in many textbooks. The first part (Integration), a wise combination of mathematics said to be modern and classical, is universally useful whereas the second part leads the reader towards a very active and specialized field of research, with possibly broad generalizations.

Roger Godement (October 1, 1921 - July 21, 2016) is known for his work in functional analysis, and also his expository books. He started as a student at the École normale supérieure in 1940, where he became a student of Henri Cartan. He started research into harmonic analysis on locally compact abelian groups, finding a number of major results; this work was in parallel but independent of similar investigations in the USSR and Japan. Work on the abstract theory of spherical functions published in 1952 proved very influential in subsequent work, particularly that of Harish-Chandra. The isolation of the concept of square-integrable representation is attributed to him. The Godement compactness criterion in the theory of arithmetic groups was a conjecture of his. He later worked with Jacquet on the zeta function of a simple algebra. He was an active member of the Bourbaki group in the early 1950s, and subsequently gave a number of significant Bourbaki seminars. He also took part in the Cartan seminar. He also wrote texts on Lie groups, abstract algebra and mathematical analysis.

“The author includes many interesting historical comments of great value for those interested in the history of mathematics. The author includes sometimes examples and exercises which help the reader to understand the theory presented.” (Dumitrŭ Popa, zbMATH 1331.28001, 2016)