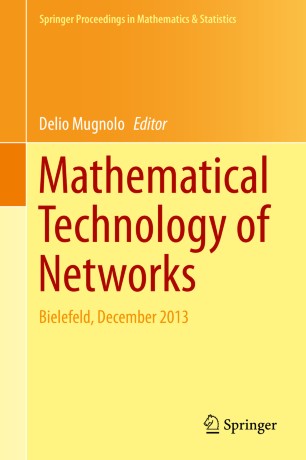 Bringing together leading researchers in the fields of functional analysis, mathematical physics and graph theory, as well as natural scientists using networks as a tool in their own research fields, such as neuroscience and machine learning, this volume presents recent advances in functional, analytical, probabilistic, and spectral aspects in the study of graphs, quantum graphs, and complex networks. The contributors to this volume explore the interplay between theoretical and applied aspects of discrete and continuous graphs. Their work helps to close the gap between different avenues of research on graphs, including metric graphs and ramified structures.

All papers were presented at the conference "Mathematical Technology of Networks," held December 4–7, 2013 at the Zentrum für interdisziplinäre Forschung (ZiF) in Bielefeld, Germany, and are supplemented with detailed figures illustrating both abstract concepts as well as their real-world applications.

Dynamical models on graphs or random graphs are increasingly used in applied sciences as mathematical tools to study complex systems whose exact structure is too complicated to be known in detail. Besides its importance in applied sciences, the field is also increasingly attracting the attention of mathematicians and theoretical physicists interested in the fundamental phenomena (synchronization, phase transitions, etc.) that can be studied in the relatively simple framework of dynamical models of random graphs.