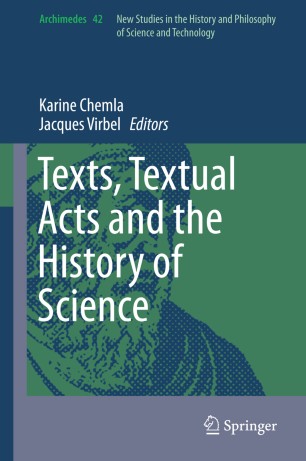 Texts, Textual Acts and the History of Science

The book presents the outcomes of an innovative research programme in the history of science and implements a Text Act Theory which extends Speech Act Theory, in order to illustrate a new approach to texts and textual communicative acts. It examines assertives (absolute or conditional statements, forecasts, insurance, etc.), directives, declarations, and enumerations, as well as different types of textual units allowing authors to perform these acts: algorithms, recipes, prescriptions, lexical templates for terminological studies, and enumerative structures. The book relies on the study of a broad range of documents of the past dealing with various domains: mathematics, zoology, medicine, lexicography. The documents examined come from scholarly sources from different parts of the world, such as China, Europe, India, Mesopotamia, and are written in a variety of European languages as well as Chinese, Cuneiform, and Sanskrit. This approach proves fruitful in both history of science and Text Act Theory.

Karine Chemla is currently Senior Researcher at the French National Center for Scientific Research (CNRS), France, in the research group SPHERE (Science—Philosophy—History). Her interest is in the history of mathematics in ancient China within the context of a world history. She also researches modern European mathematics. In both cases, she focuses from a historical anthropology viewpoint, on the relationship between mathematics and the various epistemological cultures in the context of which it is practiced and cultivated. Chemla is more widely interested in the theoretical challenges ancient mathematics raise for history of science. She conducts theoretical work on, for example, algorithms, mathematical proofs, the historians’ sources and notions such as “practice” and “cultures.” Chemla published, with Guo Shuchun, Les neuf chapitres (2004) and edited The History of Mathematical Proof in Ancient Traditions (2012). Since 2011, with Agathe Keller and Christine Proust, she is the head of the European Research Council project “Mathematical Sciences in the Ancient World” (SAW). Jacques Virbel, now retired, has served between 1975 and 1981 as vice-director of the Laboratoire d’Informatique pour les Sciences de l’Homme (Laboratory for Digital Humanities and Social Sciences). Between 1990 and 2005, he was a member of the Institut de Recherche en Informatique de Toulouse (Toulouse Institute of Computer Science Research). He has been the head of the multidisciplinary workshop “Text and Communication” (1989-2000) and of the “Cognitive Science Research Program” in Toulouse (1999-2002).

Virbel has been active for forty years in information analysis and retrieval, linguistics, and pragmatics. His publications and other works focus on natural language processing and information management, text analysis and modeling in social sciences and the Humanities (archeology, history, architecture, literature, neuropsycholinguistics), text linguistics, speech act theory, and visual semantics aspects of text architectures, application of text linguistics to text-to-speech engine for blind users of textual data, and design of psychology experiments using texts. Virbel is currently writing about an extension of speech act theory to written units larger than simple oral sentences (i.e.: texts).

“Texts, Textual Acts, and the History of Science offers a number of novel and productive approaches to textual studies; these should be particularly valuable to historians working on the premodern sciences, for which textual sources significantly predominate over other types of evidence.” (Nathan Sidoli, Isis, Vol. 108 (2), June, 2017)
Buy options