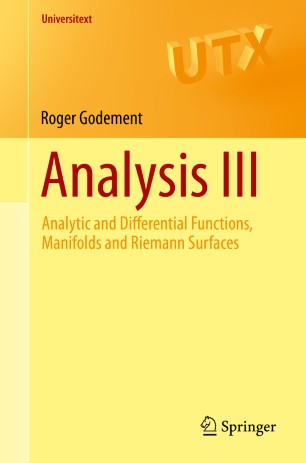 Volume III sets out classical Cauchy theory. It is much more geared towards its innumerable applications than towards a more or less complete theory of analytic functions. Cauchy-type curvilinear integrals are then shown to generalize to any number of real variables (differential forms, Stokes-type formulas). The fundamentals of the theory of manifolds are then presented, mainly to provide the reader with a "canonical'' language and with some important theorems (change of variables in integration, differential equations). A final chapter shows how these theorems can be used to construct the compact Riemann surface of an algebraic function, a subject that is rarely addressed in the general literature though it only requires elementary techniques.

Besides the Lebesgue integral, Volume IV will set out a piece of specialized mathematics towards which the entire content of the previous volumes will converge: Jacobi, Riemann, Dedekind series and infinite products, elliptic functions, classical theory of modular functions and its modern version using the structure of the Lie algebra of SL(2,R).

Roger Godement (October 1, 1921 - July 21, 2016) is known for his work in functional analysis and also his expository books. He started as a student at the École normale supérieure in 1940, where he became a student of Henri Cartan. He started research into harmonic analysis on locally compact abelian groups, finding a number of major results; this work was in parallel but independent of similar investigations in the USSR and Japan. Work on the abstract theory of spherical functions published in 1952 proved very influential in subsequent work, particularly that of Harish-Chandra. The isolation of the concept of square-integrable representation is attributed to him. The Godement compactness criterion in the theory of arithmetic groups was a conjecture of his. He later worked with Jacquet on the zeta function of a simple algebra. He was an active member of the Bourbaki group in the early 1950s, and subsequently gave a number of significant Bourbaki seminars. He also took part in the Cartan seminar. He also wrote texts on Lie groups, abstract algebra and mathematical analysis.