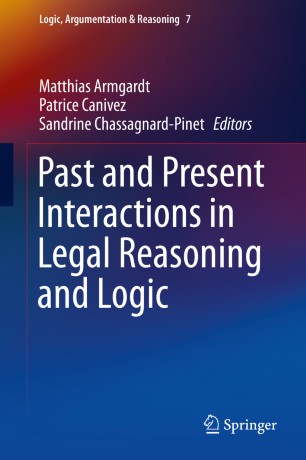 Past and Present Interactions in Legal Reasoning and Logic

This volume explores the relation between legal reasoning and logic from both a historical and a systematic perspective.  The topics addressed include, among others, conditional legal acts, disjunctions in legal acts, presumptions and conjectures, conflicts of values, Jørgensen´s Dilemma, the Rhetor´s Dilemma, the theory of legal fictions, and the categorization of contracts. The unifying problematic of these contributions concerns the conditional structures and, more particularly, the relationship between legal theory and legal reasoning in the context of conditions.

The contributions in this work constitute the first results of the ANR-DFG joint research project “JuriLog” (Jurisprudence and Logic), which aims at fostering the cooperation between legal scholars and philosophers.  On the one hand, lawyers and legal scholars have an interest in emphasizing the logical character of legal reasoning. In this respect, the present enquiry examines the question of how logic, especially newer forms of dialogical logic, can be made fruitful as a significant area of philosophy for jurisprudence and legal practice. On the other hand, logicians find in legal reasoning a striving towards clear definitions and inference-procedures that is relevant to their discipline. In order to fully understand such reciprocal relationships, it is necessary to bridge the gap between law, logic and philosophy in contemporary academic research. The essays collected in this volume all work towards this common goal.

The book is divided in three sections. In the first part, the strong relation between Roman Law and logic is explored with respect to the analysis of disjunctive statements in legal acts. The second part focuses on Leibniz´s legal theory. The third part, finally, is dedicated to current interactions between law and logic.

Matthias Armgardt is Full Professor of Civil Law, Ancient History of Law, Roman Law and Modern Private Law at the University of Konstanz, where he currently also holds the position of Prorector for Teaching. His research areas include Roman Law, Talmudic Law, Leibniz´s philosophy and logic of law, as well as European Private Law. Since 2012 he is P.I. of the DFG-ANR research project JuriLog (Jurisprudence and Logic) together with Shahid Rahman (Université de Lille 3).

Patrice Canivez is Full Professor of Moral and Political Philosophy, Director of the Department of Philosophy, Director of the Eric Weil Institute at the University of Lille 3 and member of the Société Française de Philosophie. Together with M. Crubellier he is editor of the series “Philosophy” at the Presses Universitaires du Septentrion (Lille). He has published books and articles on Aristotle, Kant, Hegel, Rousseau, Hannah Arendt, Paul Ricoeur, Eric Weil and on problems of contemporary political philosophy.

Sandrine Chassagnard-Pinet is Full Professor of Private Law at the Université Lille 2, co-director of the Centre René Demogue (CRD&P, EA 4487) and member of the team at the head of the "Maison Européenne des Sciences de l’Homme et de la Société" of Lille. Her research focuses on the theory of law, contract law and alternative dispute resolution. She has published books and articles on contractualization, globalization of the law and legal argumentation.