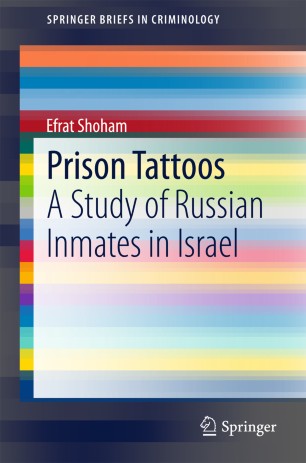 A Study of Russian Inmates in Israel

This Brief studies the important role that tattoos play in prison culture, and examines its unique manifestation among minority inmates. This work aims to provide a better understanding of prison group culture, particularly among social marginal groups, through the lens of Russian immigrants in Israeli prisons. Russian immigrants currently represent approximately 25% of the total Israeli prison population, and this book examines how tattoos show an important form of rebellion amongst this group. As tattoos are forbidden in some forms of Islam and Judaism, and the Israeli prison service confiscates over 200 homemade tattoo devices per year, this is a significant phenomenon both before and during incarceration. This work examines how despite the transition to Israel, the main social codes of Russian prisoners are still dominant and help segregate this group from the larger prison population. It provides a lens to understand Russian criminal activity in Israel, and in a larger context, the modes of social cohesion and criminal activity of organized crime groups operating in prison systems. This work will be of interest to researchers studying the organized crime and the criminal justice system, Russian organized crime in particular, as well as related studies of immigration, demography, and social cohesion.

Prof. Efrat Shoham is a senior criminologist in Ashkelon Academic College, Israel. She is chairperson of the Israeli Society of Criminology, and the research committee of the Israeli Prisoners Rehabilitation Authority. As well, she is director of the Sha'am Institute for Research on the Reintegration of released Prisoners in the Community, and co-editor of the Israeli Criminology journal.  Over the last decade Prof. Shoham has published many articles on social control and criminal behavior in segregated communities, as well as on rehabilitation of released prisoners and policing of domestic violence. Some of her recent books are: “The Dark Side of the Sun:  Social Control and Deviance in total Institutions"; " False Convictions in Israel”; "Supervision of Sex Offenders: Treatment or Punishment; " Cults, Violence and Sex: The social Construction of Deviance in post-modern Israel" ; and "Glimpse behind the Walls".