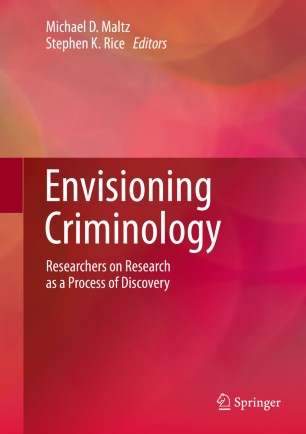 Researchers on Research as a Process of Discovery

Th is book covers research design and methodology from a unique and engaging point of view, based on accounts from infl uential researchers across the fi eld of Criminology and Criminal Justice.

Most books and articles about research in criminology and criminal justice focus on how the research was carried out: the data that were used, the methods that were applied, the results that were achieved. While these are all important, they do not present a complete picture. Envisioning Criminology: Researchers on Research as a Process of Discovery aims to fi ll that gap by providing nuance--the “back story” of why researchers selected particular problems, how they approached those problems, and how their background, training, and experience aff ected the approaches they took.

As the contributions in this book demonstrate, research is not a cut-and-dried process, as all too many methods books imply, but a living, breathing–and in some ways quirky– process that is infl uenced by non-“scientifi c” factors. Th e path taken by a researcher is important, and an appreciation of his or her background, experience, knowledge–and the setbacks and triumphs of performing the research–provides a much more complete picture of how research is done.

Th e twenty-eight chapters in this book describe the back stories of their authors, which serve to enlighten readers about the interplay between the personal and the methodological.

While primarily aimed as a textbook, this work will also be of interest to researchers in Criminology and Criminal Justice, and related Social and Behavioral Science fi elds as an account of how seminal researchers in the fi eld developed their key contributions.

Michael D. Maltz is Professor Emeritus of Criminal Justice and of Information and Decision Sciences at the University of Illinois at Chicago. He is also Senior Research Scientist at the Ohio State University’s Criminal Justice Research Center and Adjunct Professor of Sociology at OSU. He is the author of Recidivism (1984), which won awards in both criminology and operations research, and coauthor of Mapping Crime in Its Community Setting (1990), and was Editor of the Journal of Quantitative Criminology from 1996-2000. From 1995-2000 he was a Visiting Fellow at the Bureau of Justice Statistics (BJS), working on the development of graphical and geographical methods of analyzing data. For the past few years he has focused his attention on two areas: assessing and improving the quality of crime data, and improving the methods used to analyze criminal justice data. He is currently analyzing missing data in the FBI’s Uniform Crime Reports and developing imputation methods to improve their accuracy. Maltz received his undergraduate degree from Rensselaer Polytechnic Institute and his Ph.D. in from Stanford University, both in electrical engineering.

Stephen K. Rice is Associate Professor of Criminal Justice at Seattle University. He studies cooperation and defiance in individuals’ interactions with the justice system (procedural justice, restorative justice; perceptions of racial profiling; police legitimacy; radicalization; final statements of the condemned); sentinel events; social media and criminal justice; data visualization; evidence-based law enforcement. He is co-editor of Race, Ethnicity and Policing (NYU Press, 2010) and Envisioning Criminology (Springer, 2015) and author of articles on topics to include guardian policing (Harvard Executive Session on Policing and Public Safety), radicalization, the variability of anger cross-culturally, and profiling of African Americans, Latinos, and Muslim Americans. His publications have appeared in outlets to include Criminology, Justice Quarterly, Deviant Behavior, and the Journal of Quantitative Criminology. He received his master’s degree from Florida State University and his Ph.D. from the University of Florida.