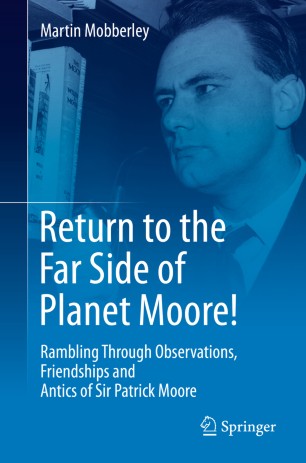 Return to the Far Side of Planet Moore!

Rambling Through Observations, Friendships and Antics of Sir Patrick Moore

The result of an exhaustive study of Sir Patrick Moore’s observations of the Moon and planets for more than 60 years, this book is a fantastic companion to the extremely popular, “It Came From Outer Space Wearing an RAF Blazer!” written by the same author.  Moore recorded his telescopic observations in his logbooks, which are reproduced and described here in detail, along with his sketches and notes. In this light, the author discusses the factors that caused Moore to switch from lunar observing to planetary and variable star observing.  He has also included personal recollections and humorous anecdotes from Moore’s friends and acquaintances, as well as a look at his best loved books. Further chapters describe Moore’s foreign travels and correspondence with those back home. Lastly, the author has not neglected a few of Moore’s most memorable television and radio appearances, which are examined along with a close up of what it was like to visit Moore’s beloved home of Farthings in Selsey. Essentially, this is a book written by popular demand from the readers of the author’s original biography, who craved more of Moore!

Martin Mobberley holds a BSc in Electronic Engineering from Brunel University and worked as an electronics/software engineer for Marconi for 22 years. He is the author of eight practical astronomy books and one major biography for Springer, as well as three small children’s space books with Top That! Publishing. He has authored over 300 articles for Astronomy Now, The Journal of the British Astronomical Association, BBC Sky at Night and various other publications. He is the author of the Comet, Eclipse and Minor Planet sections of Macmillan’s ‘Patrick Moore Yearbook of Astronomy’ and the former president of the British Astronomical Association (BAA). Martin was the BAA Goodacre Medal winner of 2000 and appeared as a guest on Patrick Moore’s Sky at Night TV program a total of ten times. He was a personal friend of Sir Patrick Moore for 30 years.