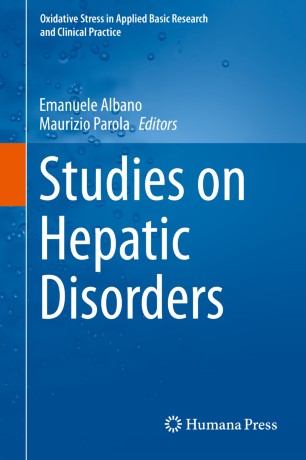 Intuitively structured and comprehensive, Studies on Hepatic Disorders is an invaluable addition to the Oxidative Stress in Applied Basic Research and Clinical Practice series and an essential resource for clinical hepatologists and researchers interested in the role of oxidative stress on liver function and disease.

Emanuele Albano, MD, PhD received degrees in Medicine, Surgery and General Pathology from the University of Turin. He completed a PhD in Biochemistry from Brunel University of West London, Uxbridge, UK. He conducted research there as well as at the Departments of Biochemistry and Toxicology at the Karolinska Institute in Stockholm. He is currently Professor of General Pathology at the University of Eastern Piedmont "A. Avogadro" in Novara where he was formerly Director of the Department of Medical Sciences. Dr. Albano is a member of several European and international scientific societies, including the Society for Free Radical Research and the International Society for Biochemical Research on Alcoholism and serves on the editorial board and referees at several journals. His main fields of interest are the study of the molecular mechanisms of cell damage resulting from oxidation caused by free radicals with particular reference to changes in energy balance and ionic homeostasis of the liver including the involvement of free radicals in the pathogenesis of liver injury induced alcohol abuse.

Maurizio Parola, MD, PhD, is Doctor of Biological Sciences, with a PhD in Experimental and Molecular Pathology, from the University of Turin and a PhD in Biochemistry from Brunel University in London. He is currently a Professor of Pathology on the Faculty of Medicine and Surgery at the University of Turin where he was formerly Director of the Department of Experimental Medicine and Oncology. Dr. Parola is a reviewer and referee for several scientific journals and a member of several international societies including The New York Academy of Sciences. His research has been devoted to studies concerning the pathogenesis of experimental acute and chronic liver injury, with particular regard to the pathogenesis of liver fibrosis and other pathological conditions such as Alzheimer's disease and diabetes mellitus. In particular, a significant part of the experimental studies was devoted to the analysis of the possible pathogenic role of oxidative stress as well as the pathogenic role played by different cell populations liver in the evolution of chronic liver diseases.