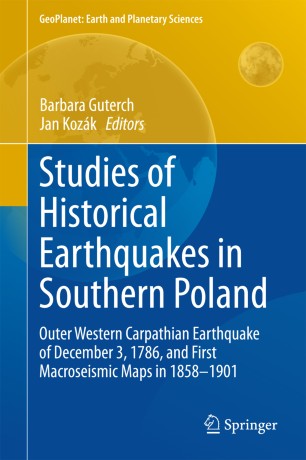 This book examines old and new data on some of the 18th and 19th century earthquakes that either occurred or were clearly felt in southern regions of Poland. Particular emphasis is put on a detailed study and reinterpretation of the unusually severe Outer Western Carpathians earthquake on December 3, 1786 (7 I0, 5.3 Mw, 35 km depth), which was the last in a series of seismic events in the years 1785 and 1786. An assessment is also made of what we presently know about the seismicity of the Western Carpathians in Poland based on to instrumental data. The book also presents material relating to earthquakes of 6-9 I0 that affected south Poland and the surrounding regions: Žilina in Slovakia (1858), Gera in Thuringia (1872), the Sudetes on the Czech-Polish border (1883, 1901), and Lower Silesia, Poland (1895). These are analyzed and illustrated by 17 contemporary macroseismic intensity maps, some of which are considered to be remarkable for those times. A new seismic catalog for Poland is provided with amendments and updates up to the end of 2014. Noteworthy is the data on two unforeseen events: one about 60 km NE of the Polish border in 2004 and one in central Poland in 2012. It shows how important it is, not least for practical engineering purposes, to perform seismic monitoring even in seemingly aseismic regions.