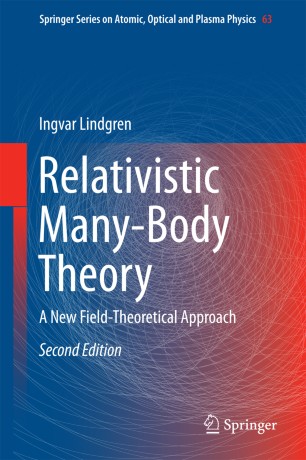 This revised second edition of the author’s classic text offers readers a comprehensively updated review of relativistic atomic many-body theory, covering the many developments in the field since the publication of the original title.  In particular, a new final section extends the scope to cover the evaluation of QED effects for dynamical processes.

The treatment of the book is based upon quantum-field theory, and demonstrates that when the procedure is carried to all orders of perturbation theory, two-particle systems are fully compatible with the relativistically covariant Bethe-Salpeter equation. This procedure can be applied to arbitrary open-shell systems, in analogy with the standard many-body theory, and it is also applicable to systems with more than two particles. Presently existing theoretical procedures for treating atomic systems are, in several cases, insufficient to explain the accurate experimental data recently obtained, particularly for highly charged ions.

The main text is divided into three parts. In Part I, the standard time-independent and time-dependent perturbation procedures are reviewed. This includes a new section at the end of chapter 2 concerning the so-called ”Fock-space procedure” or ”Coulomb-only procedure” for relativistic-QED calculations. This is a procedure on an intermediate level, frequently u

sed in recent time by chemists on molecular systems, where a full QED treatment is out of question.  Part II describes three methods for QED calculations, a) the standard S-matrix formulation, b) the Two-times Green’s-function method, developed by the St Petersburg Atomic Theory group, and c) the Covariant-evolution operator (CEO) method, recently developed by the Gothenburg Atomic Theory group.  In Part III, the CEO method is combined with electron correlation to arbitrary order to a unified MBPT-QED procedure. The new Part IV includes two new chapters dealing with dynamical properties and how QED effects can be evaluated for such processes. This part is much needed as there has been an increasing interest in the study of QED effects for such processes.

All methods treated in the book are illustrated with numerical examples, making it a text suitable for advanced students new to the field and a useful reference for established researchers.