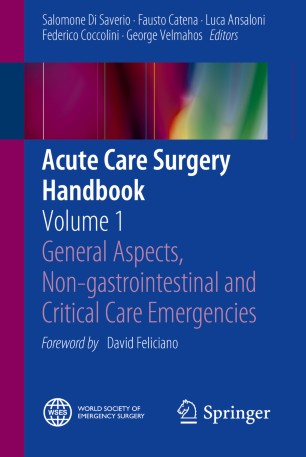 This pocket manual is a practically oriented, wide-ranging guide to acute care surgery general aspects and to non-gastrointestinal emergencies. It covers the most common problems in thoracic, obstetric, gynecologic, anorectal, vascular and skin surgery and also includes chapters on postoperative complications in bariatric surgery, antibiotic management, nutrition and interventional radiology in acute care surgery. This guide stems from collaboration with the World Society of Emergency Surgery (WSES) and aims to provide general surgeons, residents and trainees with a comprehensive and up-to-date overview of the most relevant operative techniques and with useful  "tips and tricks" applicable in daily clinical practice. A second volume on gastrointestinal and abdominal surgical emergencies is also available.

Luca Ansaloni is currently Director of the General Surgery Unit of Bergamo Hospital. From 2001 to 2010 he worked as consultant surgeon in the Emergency and Trauma Surgery Unit of Maggiore Hospital – Bologna Local Health District.

Dr. Federico Coccolini graduated from University of Bologna (Italy) and got the Specialization in General Surgery at the University of Milan (Italy) with full marks cum laude. He is currently working as a staff Surgeon at the General, Emergency and Trauma Surgery Dept. of Papa Giovanni XXIII Hospital in Bergamo (Italy). His main fields of interest are Emergency Surgery, Trauma, Abdominal Surgery and Surgical Oncology with particular focus on intra-abdominal advanced oncological diseases. He is a member of the board of the World Society of Emergency Surgery (WSES) and of the Editorial Board of 3 international journals. He has published widely (> 90 papers) in international journals and has written several book chapters, most of them as first author.

George C. Velmahos, MD, PhD, MSEd received his MD and PhD degrees from the University of Athens and his Masters in Medical Education from the University of Southern California, Los Angeles. Since 2004 he is a Professor of Surgery in Harvard Medical School and the Chief of Trauma, Emergency Surgery and Surgical Critical Care at the Massachusetts General Hospital (Boston, MA). He is also the Trauma Program Leader at the Center for Integration of Medicine with Innovative Technology (CIMIT). He is a member of 23 medical professional societies, reviewer in 15 journals, member of the Editorial Board of 6 journals, the Associate Editor of the World Journal of Surgery and the Editor-In-Chief of the Current Trauma Reports. He has authored more than 370 peer-review publications and over 45 books and book chapters. He holds leadership positions in numerous surgical societies and the American College of Surgeons. He has been honored by multiple clinical, research and teaching awards and is the Director of the annual Harvard Trauma Symposium.