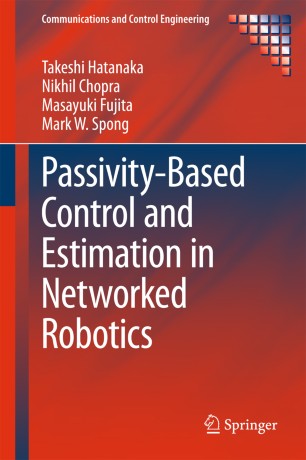 Highlighting the control of networked robotic systems, this book synthesizes a unified passivity-based approach to an emerging cross-disciplinary subject. Thanks to this unified approach, readers can access various state-of-the-art research fields by studying only the background foundations associated with passivity. In addition to the theoretical results and techniques,  the authors provide experimental case studies on testbeds of robotic systems  including networked haptic devices, visual robotic systems,  robotic network systems and visual sensor network systems.

The text begins with an introduction to passivity and passivity-based control together with the other foundations needed in this book. The main body of the book consists of three parts. The first examines how passivity can be utilized for bilateral teleoperation and demonstrates the inherent robustness of the passivity-based controller against communication delays. The second part emphasizes passivity’s usefulness for visual feedback control and estimation. Convergence is rigorously proved even when other passive components are interconnected. The passivity approach is also differentiated from other methodologies. The third part presents the unified passivity-based control-design methodology for multi-agent systems. This scheme is shown to be either immediately applicable or easily extendable to the solution of various motion coordination problems including 3-D attitude/pose synchronization, flocking control and cooperative motion estimation.

Academic researchers and practitioners working in systems and control and/or robotics will appreciate the potential of the elegant and novel approach to the control of networked robots presented here. The limited background required and the case-study work described also make the text appropriate for and, it is hoped, inspiring to students.

Masayuki Fujita is a Professor with the Department of Mechanical and Control Engineering at Tokyo Institute of Technology. He is also a Program Officer for Japan Science and Technology Agency (JST) Core Research for Evolutional Science and Technology (CREST). He received the Dr. of Eng. degree in Electrical Engineering from Waseda University, Tokyo, in 1987. Prior to his appointment at Tokyo Institute of Technology, he held faculty appointments at Kanazawa University and Japan Advanced Institute of Science and Technology. His research interests include cooperative energy management systems, passivity-based control and estimation in robotics and applied robust control. He is currently the CSS Vice President Conference Activities. He was a member of CSS Board of Governors. He served as the General Chair of the 2010 IEEE Multi-conference on Systems and Control. He was also the Head of SICE Technical Division on Control, the Chair of SICE Technical Committee on Control Theory and a Director of SICE. He has served/been serving as an Associate Editor for the IEEE Transactions on Automatic Control, the IEEE Transactions on Control Systems Technology, Automatica, Asian Journal of Control and an Editor for the SICE Journal of Control, Measurement and System Integration. He is a recipient of the 2008 IEEE Transactions on Control Systems Technology Outstanding Paper Award. He also received the 2010 SICE Education Award and the Outstanding Paper Awards from the SICE and ISCIE. Mark W. Spong was born on November 5, 1952, in Warren, Ohio. He received the M.S. and D.Sc. degrees in systems science and mathematics in 1979 and 1981, respectively, from Washington University in St. Louis. From 1984 to 2008 he was at the University of Illinois at Urbana-Champaign. Currently he is Dean of the Erik Jonsson School of Engineering and Computer Science and holder of the Lars Magnus Ericsson Chair and the Excellence in Education Chair in the Department of Electrical Engineering at the University of Texas at Dallas. He has held visiting positions at the University of Waterloo, Canada, the CINVESTAV del IPN, Mexico City, the Lund Institute of Technology, Sweden, the Laboratoire d'Automatique de Grenoble, France, the Université de Tecnologie de Compiegne, France, the Katholiek Universitet, Leuven, Belgium, the National University of Singapore, and the Technische Universität, München, and has served as a consultant to industry and government. Dr. Spong is Past President of the IEEE Control Systems Society, a Fellow of the IEEE and has served as both Editor-in-Chief and Associate Editor of the IEEE Transactions on Control System Technology, and as Associate Editor of the IEEE Transactions on Robotics and Automation, the IEEE Control Systems Magazine and the IEEE Transactions on Automatic Control. He served as Vice President for Publication Activities from 2000-2002 and is a member of the Board of Governors of the IEEE Control Systems Society. Dr. Spong's main research interests are in robotics, mechatronics and nonlinear control theory. He has authored or coauthored more than 250 technical articles in control and robotics, four books and holds one patent. His recent awards include the first IROS Fumio Harashima Award for Innovative Technologies, the IEEE Transactions on Control Systems Technology Outstanding Paper Award, the Automatica Best Paper Award, the Senior Scientist Research Award from the Alexander von Humboldt Foundation, the Distinguished Member Award from the IEEE Control Systems Society, the IEEE Third Millennium Medal and the John R. Ragazzini from the American Automatic Control Council. In addition, he has twice received the O. Hugo Schuck Award from the American Automatic Control Council.