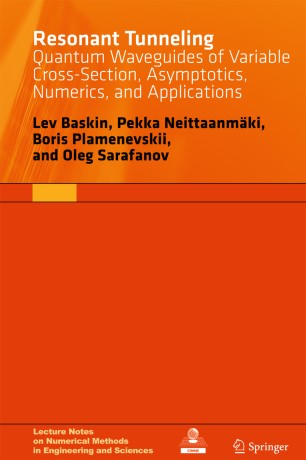 This volume studies electron resonant tunneling in two- and three-dimensional quantum waveguides of variable cross-sections in the time-independent approach.

Mathematical models are suggested for the resonant tunneling and develop asymptotic and numerical approaches for investigating the models. Also, schemes are presented for several electronics devices based on the phenomenon of resonant tunneling.

Devices based on the phenomenon of electron resonant tunneling are widely used in electronics. Efforts are directed towards refining properties of resonance structures. There are prospects for building new nanosize electronics elements based on quantum dot systems.

However, the role of resonance structure can also be given to a quantum wire of variable cross-section. Instead of an "electrode - quantum dot - electrode" system, one can use a quantum wire with two narrows. A waveguide narrow is an effective potential barrier for longitudinal electron motion along a waveguide. The part of the waveguide between two narrows becomes a "resonator" , where electron resonant tunneling can occur. This phenomenon consists in the fact that, for an electron with energy E, the probability T(E) to pass from one part of the waveguide to the other part through the resonator has a sharp peak at E = Eres, where Eres denotes a "resonant" energy. Such quantum resonators can find applications as elements of nanoelectronics devices and provide some advantages in regard to operation properties and production technology.

The book is addressed to mathematicians, physicists, and engineers interested in waveguide theory and its applications in electronics.