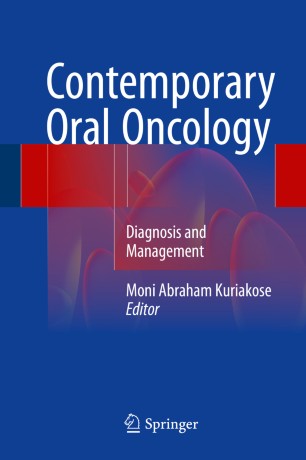 This is the second of four volumes that together offer an authoritative, in-depth reference guide covering all aspects of the management of oral cancer from a multidisciplinary perspective and on the basis of a strong scientific foundation. This volume addresses a range of management issues in oral cancer, from imaging and staging through to the roles of radiation therapy and chemotherapy. Principles of ablative surgery are explained, and neck dissection and sentinel lymph node biopsy techniques, described. Detailed consideration is also given to the management of complications, salvage surgery and re-radiation, the biologic basis of treatment failure, and emerging approaches to overcome treatment resistance. The inclusion of resource-stratified guidelines will meet the needs of practitioners in different geographic regions with varying resources.

Moni Abraham Kuriakose, BSc, BDS, MB ChB, MD, FDSRCS, FFDRCS, FRCS Ed, FRCS (Maxillofacial Surgery), is Director of the Translational Research Program and Attending Surgeon in the Department of Head and Neck/Plastic and Reconstructive Surgery at the Roswell Park Cancer Institute, Buffalo, New York, and Professor of Surgery, Director of the Department of Surgical Oncology, and Chief of the Division of Head and Neck Oncology at the Mazumdar-Shaw Cancer Center, Narayana Health City, Bangalore, India. In addition, he is Adjunct Associate Professor in the Departments of Oral and Maxillofacial Surgery and Otolaryngology at New York University. Dr. Kuriakose has received numerous honors and awards and has held many national and international leadership positions, including as Chairman of the Oral Cancer Special Interest Group, International Association of Oral and Maxillofacial Surgeons (2008-2012),  Secretary General of the International Academy of Oral Oncology (2013-2015) and President of Indian Head and Neck Oncology Society (2015-2017). He is a member of the editorial boards for Oral Oncology and the Journal of Maxillofacial and Oral Surgery, and a reviewer for a number of other leading journals. Dr. Kuriakose’s research group focuses on two key challenges: down-staging and prevention of oral cancer; and reversing chemotherapy resistance. He has been the principal investigator on many research projects and is the author of over 150 peer-reviewed publications.