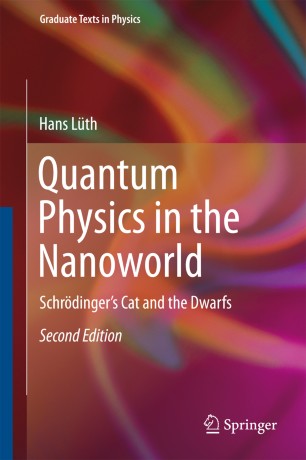 Quantum Physics in the Nanoworld

Schrödinger's Cat and the Dwarfs

The second edition deals with all essential aspects of non-relativistic quantum physics up to the quantisation of fields. In contrast to common textbooks of quantum mechanics, modern experiments are described both for the purpose of foundation of the theory and in relation to recent applications. Links are made to important research fields and applications such as elementary particle physics, solid state physics and nuclear magnetic resonance in medicine, biology and material science. Special emphasis is paid to quantum physics in nanoelectronics such as resonant tunnelling, Coulomb blockade and the realisation of quantum bits.
This second edition also considers quantum transport through quantum point contacts and its application as charge detectors in nanoelectronic circuits. Also the realization and the study of electronic properties of an artificial quantum dot molecule are presented. Because of its recent interest a brief discussion of Bose-Einstein condensation has been included, as well as the recently detected Higgs particle. Another essential new addition to the present book concerns a detailed discussion of the particle picture in quantum field theory. Counterintuitive aspects of single particle quantum physics such as particle-wave duality and the Einstein-Podolski-Rosen (EPR) paradox appear more acceptable to our understanding if discussed on the background of quantum field theory. The non-locality of quantum fields explains non-local behaviour of particles in classical Schrödinger quantum mechanics. Finally, new problems have been added.
The book is suitable as an introduction into quantum physics, not only for physicists but also for chemists, biologists, engineers, computer scientists and even for philosophers as far as they are interested in natural philosophy and epistemology.

Hans Lüth was born in Aachen, Germany, in 1940. He received the diploma in physics in 1965 and the doctoral degree (PhD) in physics in 1968, both from the Aachen University of Technology (RWTH). Between 1974 and 1986 he held several guest scientist and visiting professor positions at the IBM Thomas J. Watson Research Centre (USA), the Universities of Paris (F), Aix-Marseille (F) and Modena (I). Since 1980 he is professor for physics and since 2000 simultaneously professor for electrical engineering at the RWTH Aachen. Additionally, in 1988 he became the director of the Institute of Bio- and Nanosystems (now Peter Grünberg Institut, PGI 9) at the Research Centre Jülich, Germany. Between 2006 and 2007 he was Research Director for Key Technologies at the Research Centre Jülich. For his scientific work and for his globally used text books he was awarded the Doctor Honoris Causa by the Universite de Haute-Alsace, Mulhouse-Colmar (F). His research interests center around semiconductor interface physics and quantum electronics.