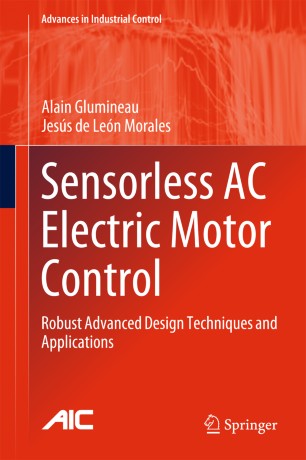 This monograph shows the reader how to avoid the burdens of sensor cost, reduced internal physical space, and system complexity in the control of AC motors. Many applications fields—electric vehicles, wind- and wave-energy converters and robotics, among them—will benefit.
Sensorless AC Electric Motor Control describes the elimination of physical sensors and their replacement with observers, i.e., software sensors. Robustness is introduced to overcome problems associated with the unavoidable imperfection of knowledge of machine parameters—resistance, inertia, and so on—encountered in real systems. The details of a large number of speed- and/or position-sensorless ideas for different types of permanent-magnet synchronous motors and induction motors are presented along with several novel observer designs for electrical machines. Control strategies are developed using high-order, sliding-mode and quasi-continuous-sliding-mode techniques and two types of observer–controller schemes based on backstepping and sliding-mode techniques are described. Experimental results validate the performance of these observer and controller configurations with test trajectories of significance in difficult sensorless-AC-machine problems.
Control engineers working with AC motors in a variety of industrial environments will find the space-and-cost-saving ideas detailed in Sensorless AC Electric Motor Control of much interest. Academic researchers and graduate students from electrical, mechanical and control-engineering backgrounds will be able to see how advanced theoretical control can be applied in meaningful real systems.

Alain Glumineau received the PhD degree in Automatic Control  in 1981 from  the school of Mechanical Engineering, Nantes University,  France. Since 1982 he has been with the IRCCyN Laboratory (http://www.irccyn.ec-nantes.fr) in Ecole Centrale de Nantes, France,  as Associate Professor then Full Professor. Alain Glumineau's current interests concern theoretical issues in nonlinear control with applications mainly to electric and pneumatic systems.
Jesús de León Morales received the Ph.D. degree in Automatic Control from Claude Bernard Lyon 1 University, France, in 1992. Since 1993, he is a Professor of Electrical Engineering at Universidad Autonoma de Nuevo Leon, Mexico. He is currently working on applications of control theory, electrical machines, nonlinear observers and power systems.