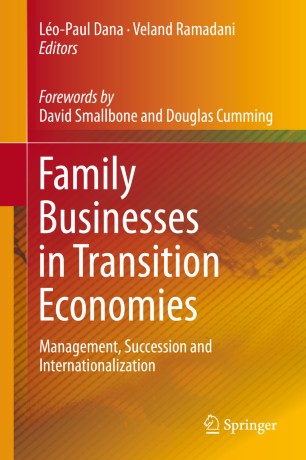 This book presents the reader a comprehensive understanding of the development of family business in transitional economies. Throughout eastern Europe, post-Communist countries transitioning to market-based economies are obtaining a variety of results due to diverse policy approaches. Expert contributions in this book draw from a wealth of information in this context and include thought-provoking policy prescriptions for the future. This book concentrates on the challenges to predict the direction emerging markets will take, particularly when dealing with the wide-ranging social and economic situations taking place in post-Communist Eastern Europe. This reference volume for policymakers, educators, investors, and researchers also provides a much-needed and timely survey of family firms in the transitioning markets of post-Communist Europe.

Veland Ramadani is an Assistant Professor at South-East European University, Republic of Macedonia, where he teaches both undergraduate and postgraduate courses in entrepreneurship and small business management. During the period 2012- 2014, he served as Coordinator of Integrated Study Programme Department: Contemporary Enterprise Management, within South-East European University. He formerly served as Visiting Professor of Entrepreneurship at Universum College and AAB University, Republic of Kosovo. His research interests include entrepreneurship, small business management and venture capital investments. He authored or co-authored around forty-five research articles and ten books. Among his recent books are Entrepreneurship in the Balkans, published by Springer, Entrepreneurship, published by South-East European University and Female entrepreneurship in transitional economies: Trends and challenges, published by Palgrave Macmillan. Veland also serves as a member of editorial and reviewer board of several international journals. He was engaged by the President of Republic of Macedonia as a member of experts’ committee to analyse the economical, technological and juridical conditions for establishing techno-parks in the Republic of Macedonia. He has also delivered different trainings to the heads of departments in the Ministry of Economy of Macedonia.