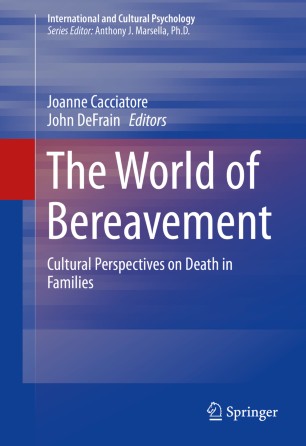 The World of Bereavement

Cultural Perspectives on Death in Families

This visionary work explores the sensitive balance between the personal and private aspects of grief, the social and cultural variables that unite communities in bereavement, and the universal experience of loss. Its global journey takes readers into the processes of coping, ritual, and belief across established and emerging nations, indigenous cultures, and countries undergoing major upheavals, richly detailed by native scholars and practitioners. In these pages, culture itself is recognized as formed through many lenses, from the ancestral to the experiential. The human capacity to mourn, endure, and make meaning is examined in papers such as:

The World of Bereavement will fascinate and inspire clinicians, providers, suitable for graduate courses in death and dying, family studies, social work, psychology, and nursing, and researchers in the field of death studies as well as privately-held professional training programs and the bereavement community in general.

Joanne Cacciatore is an Associate Professor at Arizona State University where she directs the graduate Certificate in Trauma and Bereavement program, and she is the founder of the MISS Foundation, an international organization that has aided families whose babies and children are dying or have died since 1996. Her prolific research on all apsects of traumatic grief is published in many top tier journals, she presents at conferences around the world, and her work has been featured in major media venues such the New York Times, Boston Globe, San Francisco Chronicle, CNN, Newsweek, and the BBC.  The reicipent of numerous awards for volunteerism, she has committed her life to helping families experiencing traumatic grief, working in direct clinical practice with grieving families around the world since 1999.  In 2014, she published a mindfulness-based workbook for grievers, Selah: An invitation toward fully inhabited grief. Her blog can be found at drjoanne.blogspot.com.

John DeFrain is a Professor Emeritus of Family Science in the Department of Family and Consumer Sciences, College of Human Resources and Family Sciences, University of Nebraska-Lincoln. From 1976 to 1984 he co-directed a joint graduate training program in family therapy at UNL, and has done extensive consulting for courts and families on marriage, divorce, and custody issues. He was a co-founder of the National Symposium on Building Family Strengths which, for ten years, focused attention on nationwide efforts to enhance family relationships. He has co-authored and co-edited 15 books, including: Coping with Sudden Infant Death (with Jacque Taylor and Linda Ernst, published in 1982) Secrets of Strong Families (with Nick Stinnett, published in 1985) Stillborn: The Invisible Death (with Leona Martens, Jan Stork, and Warren Stork, published in 1986) On Our Own: A Single Parent's Survival Guide (with Judy Fricke and Julie Elmen, published in 1987.