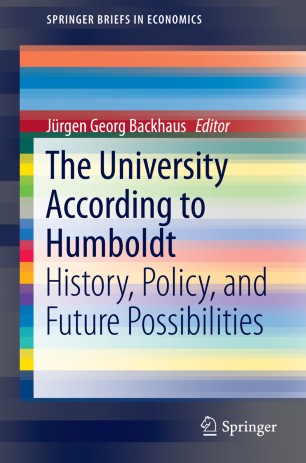 The University According to Humboldt

Part of the SpringerBriefs in Economics book series (BRIEFSECONOMICS, volume 89)

This book discusses the philosophy and educational reforms initiated by Wilhelm von Humboldt as well as their legacy in the modern university system. It begins with a discussion of the history of the university from antiquity and the Middle Ages through the era of Humboldt’s reforms and its remnants in and implications for the present day. The authors then delve into policy, outlining the key conflicts that have informed the development of university educational policy, such as the clash between academia and professional education, the coordination of public administration and educational institutions, and the perennial issue of funding. Humboldt’s ideas are then discussed within an economic context, using his principals of the state to analyze the relationship between current models of household and family economics and German economic and social policy. The book is rounded off by a philosophical analysis of the institution of the university and concludes with an update of the remains Humboldt’s reforms within the current university system. With its multidisciplinary approach to the study of higher education reform in Europe and its key players, this book will appeal to scholars of economic history, educational policy, and public administration as well as administrators and policy makers in higher education.  ​