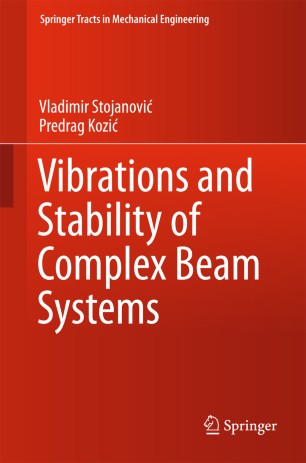 This book reports on solved problems concerning vibrations and stability of complex beam systems. The complexity of a system is considered from two points of view: the complexity originating from the nature of the structure, in the case of two or more elastically connected beams; and the complexity derived from the dynamic behavior of the system, in the case of a damaged single beam, resulting from the harm done to its simple structure. Furthermore, the book describes the analytical derivation of equations of two or more elastically connected beams, using four different theories (Euler, Rayleigh, Timoshenko and Reddy-Bickford). It also reports on a new, improved p-version of the finite element method for geometrically nonlinear vibrations. The new method provides more accurate approximations of solutions, while also allowing us to analyze geometrically nonlinear vibrations. The book describes the appearance of longitudinal vibrations of damaged clamped-clamped beams as a result of discontinuity (damage). It describes the cases of stability in detail, employing all four theories, and provides the readers with practical examples of stochastic stability. Overall, the book succeeds in collecting in one place theoretical analyses, mathematical modeling and validation approaches based on various methods, thus providing the readers with a comprehensive toolkit for performing vibration analysis on complex beam systems.