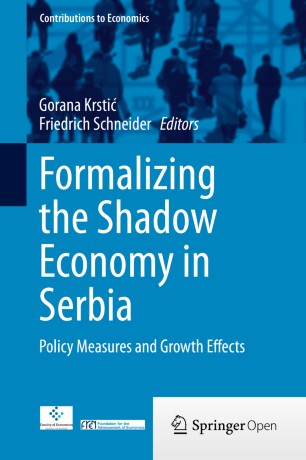 Formalizing the Shadow Economy in Serbia

Gorana Krstić is an Associate Professor at the Faculty of Economics, University of Belgrade. She obtained her PhD in Economics at School of Social Sciences, Sussex University in 2002. Her main research interests are the labour markets, informal economy, poverty and social policy. She has published (and edited) 16 monographs in these fields and has had more than 40 articles published in both national and international journals. She has been consulting short and long term for leading international agencies, including the World Bank, UNDP, ILO, EC and USAID.

Since 1986 Friedrich Schneider has been Professor of Economics at Johannes Kepler University of Linz, Austria. He obtained his PhD in Economics from the University of Konstanz in 1976 and has held numerous visiting and honorary positions at a number of universities. He was the European Editor of Public Choice from 1991 to 2004 and has published extensively in leading economics journals including The Quarterly Journal of Economics, The American Economic Review, The Economic Journal, and Kyklos. He has published (1974 – December 2013) 70 books, 206 articles in scientific journals, and 178 articles in edited volumes.