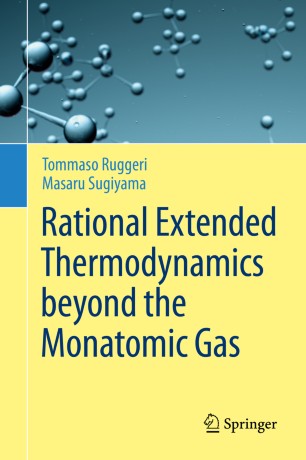 Rational extended thermodynamics (RET) is a thermodynamic theory that is applicable to non-equilibrium phenomena. It is described by differential hyperbolic systems of balance laws with local constitutive equations. As RET has been strictly related to the kinetic theory through the closure method of moment hierarchy associated to the Boltzmann equation, the applicability range of the theory has been restricted within rarefied monatomic gases.
This book is dedicated to the recent developments in RET with the aim to explore polyatomic gas, dense gas, and mixture of gases in non-equilibrium. In particular we present the theory of dense gases with 14 fields, which reduces to the Navier-Stokes Fourier classical theory in the parabolic limit. Molecular RET with an arbitrary number of field-variables for polyatomic gases is also discussed and the theory is proved to be perfectly compatible with the kinetic theory in which the distribution function depends on an extra variable that takes into account a molecule’s internal degrees of freedom. Recent results on mixtures of gases with multi-temperature are presented together with a natural definition of the average temperature. The qualitative analysis and, in particular, the existence of the global smooth solution and the convergence to equilibrium are also studied by taking into account the fact that the differential systems are symmetric hyperbolic. Applications to shock and sound waves are analyzed together with light scattering and heat conduction, and the results are compared with experimental data.
The book represents a valuable resource for applied mathematicians, physicists and engineers, offering powerful models for potential applications like satellites reentering the atmosphere, semiconductors, and nano-scale phenomena.

“This research book presents a lucid explanation of rational extended thermodynamics, including most recent developments. The methodology of the book can provide important models for some applications in current advanced technology. The book, which lists up some open problems, will be of interest to applied mathematicians, physicists and engineers, and it will certainly stimulate further research on the subject.” (M. Cengiz Dökmeci, zbMATH 1330.76003, 2016)