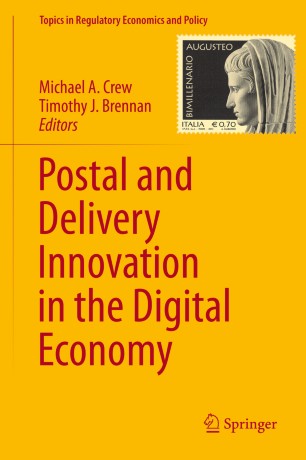 Postal and Delivery Innovation in the Digital Economy

Part of the Topics in Regulatory Economics and Policy book series (TREP, volume 50)

Worldwide, postal and delivery economics is the subject of considerable interest. The postal industry’s business model is in drastic need of change. Notably, the European Commission and member states are still wrestling with the problems of implementing liberalization of entry into postal markets, addressing digital competition, and maintaining the universal service obligation. In the United States, the Postal Accountability and Enhancement Act of 2006 has, perhaps, exacerbated some of the problems faced by the United States Postal Service (USPS). Currently, the USPS has serious financial problems because of difficulties it faces in making changes and the failure of the Act to address problems that have been long-standing. Electronic competition is severe and affects post offices (POs) worldwide, which have been slow to address the threat. This book addresses this new reality and includes discussion of how POs may attempt to reinvent themselves. Parcels and packets will play a major role in developing new business models for postal operators. This book is of use not only to students and researchers interested in the field, but also to postal operators, consulting firms, utilities, regulatory commissions, Federal Government Departments and agencies of the European Union and other countries.