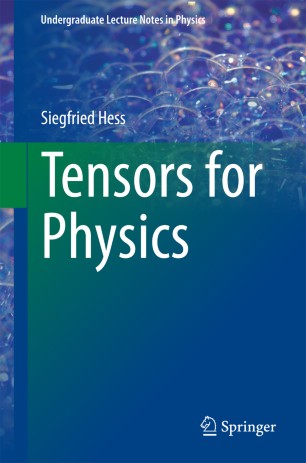 This book presents the science of tensors in a didactic way. The various types and ranks of tensors and the physical basis is presented. Cartesian Tensors are needed for the description of directional phenomena in many branches of physics and for the characterization the anisotropy of material properties. The first sections of the book provide an introduction to the vector and tensor algebra and analysis, with applications to physics,  at undergraduate level. Second rank tensors, in particular their symmetries, are discussed in detail. Differentiation and integration of fields, including generalizations of the Stokes law and the Gauss theorem, are treated. The physics relevant for the applications in mechanics, quantum mechanics, electrodynamics and hydrodynamics is presented. The second part of the book is devoted to  tensors of any rank, at graduate level.  Special topics are irreducible, i.e. symmetric traceless tensors, isotropic tensors, multipole potential tensors, spin tensors, integration and spin-trace formulas, coupling of irreducible tensors, rotation of tensors. Constitutive laws for optical, elastic and viscous properties of anisotropic media are dealt with.  The anisotropic media include crystals, liquid crystals and isotropic fluids, rendered anisotropic  by external orienting fields. The dynamics of tensors deals with phenomena of current research.  In the last section,  the 3D Maxwell equations are reformulated in their 4D version,  in accord with special relativity.

Siegfried Hess studied Mathematics and Physics at the University Erlangen-Nürnberg, was a graduate student in Chemical Engineering at the University of  Minnesota in Minneapolis, USA and  got his PhD in Physics in Erlangen in 1967. He was postdoc at the Kamerlingh Onnes Laboratory of the University Leiden, Holland and made his habilitation in Physics in Erlangen, 1970. Later, he became professor for Theoretical Physics in Erlangen and from 1984 till 2007 he held the chair for Transport Theory and Statistical Physics at the Institute for Theoretical Physics of the Technical University Berlin. As guest scientist and visiting professor he worked at the Department of Physics of the University of Toronto, Canada,  at the Huygens Laboratory of the University Leiden, at the National Bureau of Standards (NBS, now NIST) in Boulder, Colorado, USA, at the Institute Laue-Langevin in Grenoble, France, at the department of Chemistry of the National Australian University in Canberra and at the Institute for Theoretical Physics (ITP, now KITP) of the University of California in Santa Barbara.
Siegfried Hess was involved in numerous national and international research projects, both as project leader and as reviewer and adviser. His scientific work is documented in over 250 publications. The list of publications features the names of over 100 co-authors, viz. of students,  postdocs and colleagues, from about 20 countries and of all 5 continents.   He was fond of demonstrating the advantages of the use of Cartesian Tensors in teaching the courses of Theoretical Physics and in his research dealing with equilibrium and non-equilibrium properties of anisotropic fluids and other topics of condensed matter physics.

“This book is devoted to a thorough didactic presentation of tensors, which play an important role in Physics in order to describe anisotropic phenomena and their orientational behavior. … This volume is very well written and it can be a valuable support to researchers and graduate students in mathematical physics, applied nonlinear analysis and other applied sciences.” (Teodora-Liliana Rădulescu, zbMATH 1320.00002, 2015)