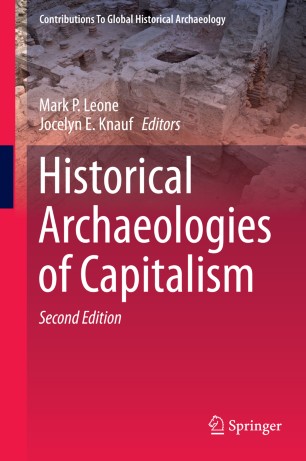 This new edition of Historical Archaeologies of Capitalism shows where the study of capitalism leads archaeologists, scholars and activists. Essays cover a range of geographic, colonial, and racist contexts around the Atlantic basin: Latin America and the Caribbean, North America, the North Atlantic, Europe, and Africa. Here historical archaeologists use current capitalist theory to show the results of creating social classes, employing racism, and beginning and expanding the global processes of resource exploitation. Scholars in this volume also do not avoid the present condition of people, discussing the lasting effects of capitalism’s methods, resistance to them, their archaeology, and their point to us now.

Chapters interpret capitalism in the past, the processes that make capitalist expansion possible, and the worldwide sale and reduction of people. Authors discuss how to record and interpret these. This book continues a global historical archaeology, one that is engaged with other disciplines, peoples, and suppressed political and economic histories. Authors in this volume describe how new identities are created, reshaped, and made to appear natural.

Mark P. Leone is professor in the Department of Anthropology, University of Maryland, College Park. He joined the faculty in 1976 after being an assistant professor at Princeton University. He has directed Archaeology in Annapolis since 1981.He has written two books devoted to Annapolis and to issues illustrated by its archaeology. The first is The Archaeology of Liberty in an American Capital: Excavations in Annapolis, University of California Press, 2005. The second is Critical Historical Archaeology, Left Coast Press, 2010.

Leone’s major research in Annapolis involves the city’s baroque gardens and town plans, African American culture in Annapolis since 1700, and a commitment to archaeology for public understanding begun in 1983.Since 2000, he has guided Archaeology in Annapolis through excavations at William Paca’s 1792 plantation on Wye Island, on Maryland’s Eastern Shore and at Wye House, home of the Lloyd family and Frederick Douglass, also on the Eastern Shore.

Jocelyn E. Knauf completed her PhD in Anthropology at the University of Maryland, College Park in May of 2013. She received a B.A. in Anthropology and a B.A. in International Studies from American University and a Masters of Applied Anthropology from the University of Maryland. Her dissertation research, conducted through the Archaeology in Annapolis program, focused on the processes of social identification and differentiation surrounding gender, race and labor in late 19th and early 20th century Annapolis, Maryland. Her research traces these shifting social relationships through interpretation of material culture including ceramics, glass, and landscapes. Her research interests include historical archaeology, material culture studies, feminist theory, social identity and cultural heritage issues related to anthropological research.

“The volume benefits from numerous chapters authored by researchers not based in North America, and the editors’ efforts to be inclusive to global archaeologies of capitalism are applauded. … the chapters in the second edition, much like the first, are well-formed narratives on capitalism, making this volume a significant contribution to the field. ” (Todd M. Ahlman, American Antiquity, Vol. 82 (1), 2017)

“This volume invites the reader to a critical understanding of capitalism and is thus a most useful reading for all those interested in the historical archaeology of modernity.” (Pedro Paulo A. Funari, Antiquity, Vol. 90 (351), June, 2016)

“Offers a stunning range of high-quality, cutting edge contributions to the archaeology and history of capitalist processes. … The book continues Leone's longstanding concern with the social effects of archaeology in the present, and how to best cultivate critical insights among various publics. … this book is a must-read for theoretically-informed historical archaeologists and it provides an impressive array of topics and settings that could illustrate much of the range of historical archaeological concerns in the classroom.” (Kurt A. Jordan, Historical Archaeology, Vol. 50 (4), 2015)