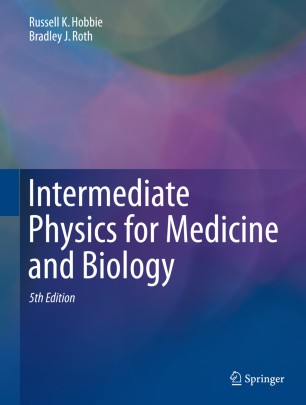 Intermediate Physics for Medicine and Biology

This classic text has been used in over 20 countries by advanced undergraduate and beginning graduate students in biophysics, physiology, medical physics, neuroscience, and biomedical engineering. It bridges the gap between an introductory physics course and the application of physics to the life and biomedical sciences. Extensively revised and updated, the fifth edition incorporates new developments at the interface between physics and biomedicine. New coverage includes cyclotrons, photodynamic therapy, color vision, x-ray crystallography, the electron microscope, cochlear implants, deep brain stimulation, nanomedicine, and other topics highlighted in the National Research Council report BIO2010. As with the previous edition, the first half of the text is primarily biological physics, emphasizing the use of ideas from physics to understand biology and physiology, and the second half is primarily medical physics, describing the use of physics in medicine for diagnosis (mainly imaging) and therapy. Among the many topics carried forward are thorough treatments of forces in the skeletal system, fluid flow, the logistic equation, scaling, equilibrium in statistical mechanics, the chemical potential and free energy, transport,   membranes and osmosis,  magnetic and electrical signals from nerves and the heart, membranes and gated channels in membranes, biological magnetic fields, linear and nonlinear feedback systems, including biological clocks and chaotic behavior, biological signal analysis, hearing and medical ultrasound, atoms and light, optical coherence tomography, radiometry and photometry, the interaction of photons and charged particles in tissue, radiological physics and the use of x-rays in diagnosis and therapy, nuclear medicine, and magnetic resonance imaging. Discussion of theory is closely linked to experiment. Prior courses in physics and in calculus are assumed.

Intermediate Physics for Medicine and Biology, Fifth Edition is also ideal for self study and as a reference for workers in medical and biological research. Over 850 problems test and enhance the student's understanding and provide additional biological examples. A solutions manual is available to instructors. Each chapter has an extensive list of references.

Russell K. Hobbie received a B. Physics from MIT and a PhD from Harvard University. He went to the University of Minnesota as a post-doc in 1960 and remained there for 38 years. Originally working in nuclear physics, he became interested in medical issues when he met Richard Reece, MD at a party. The two worked on computer-assisted interpretation of laboratory test results for several years.
Hoping to make the pre-med physics course more interesting, Prof. Hobbie, between 1971 and 1973, audited all the courses medical students take in their first two years at the University of Minnesota. He was amazed by the amount of physics he found in these courses that had seldom been discussed in the general physics course. A number of articles he wrote for the American Journal of Physics presaged the current content recommendations for pre-med and biological physics courses.
Prof. Hobbie also found a great discrepancy between the physics in papers in the biological research literature and the level of understanding of most biology majors or pre-med students who have taken a year of physics. It was clear that an intermediate level physics course would help these students. Prof. Hobbie developed such a course in 1973, which led to the publication of Intermediate Physics for Medicine and Biology in 1978.
Prof. Hobbie is a member of the American Physical Society, the American Association of Physicists in Medicine, and the Institute of Electrical and Electronic Engineers. He is a Fellow of the American Association of Physics Teachers.

Bradley J. Roth was born in Clinton, Iowa in 1960, and was raised in Morrison, Illinois. He attended the University of Kansas, majoring in Physics (BS, 1982) and Vanderbilt University (MS, 1985; PhD, 1987). In graduate school, he worked in the Living State Physics Laboratory headed by John Wikswo. In 1988, Prof. Roth joined the Biomedical Engineering and Instrumentation Program at the National Institutes of Health in Bethesda, Maryland.
Prof. Roth's research at NIH centered on three themes: cardiac electrophysiology, magnetic stimulation of nerves, and analysis of the electroencephalogram. From 1995 to 1998, he was the Robert T. Lagemann Assistant Professor of Living State Physics at Vanderbilt. In 1998, he accepted his current position in the Department of Physics at Oakland University.
In 2006, Prof. Roth was elected a Fellow of the American Physical Society (Division of Biological Physics). The citation reads: "For his theoretical and numerical studies of bioelectric and biomagnetic phenomena, especially for his contributions to the bidomain model of the heart."