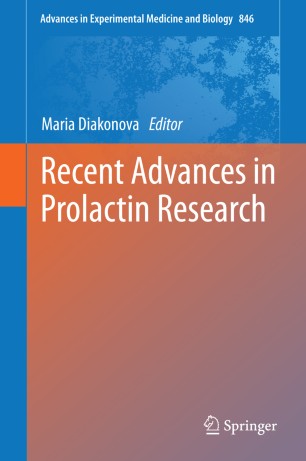 Part of the Advances in Experimental Medicine and Biology book series (AEMB, volume 846)

Recent Advances in Prolactin Research summarizes the current knowledge of prolactin (PRL), PRL receptor, PRL-dependent signaling pathways, the role of PRL in oncogenesis and PRL crosstalk with other oncogenic factors. The chapters are written by experts in these fields and focus on identifying and reviewing timely experimental findings that provide new insights into the expanding role of PRL in the pathophysiology associated with a variety of human conditions.

Prolactin is a peptide hormone that is best known for its role in lactation. Prolactin also has an influence on hematopoiesis and angiogenesis, and is involved in the regulation of blood clotting through several pathways. Although PRL was discovered more than 80 years ago, the understanding of PRL signaling and its relationship to various pathologies is still very incomplete. PRL is not only a pituitary hormone with an important role in reproduction, but PRL also acts as a cytokine, modulating a wide variety of physiological processes. For example, data gathered during the last decade have demonstrated that locally produced PRL acts as the autocrine/paracrine factor and plays a contributory role during breast oncogenesis. In fact, the scientific and clinical communities have suggested that the manipulation of the PRL axis may lead to the successful treatment of breast cancer. However, recent work has demonstrated that the role of the PRL axis is much more complex than first envisaged.