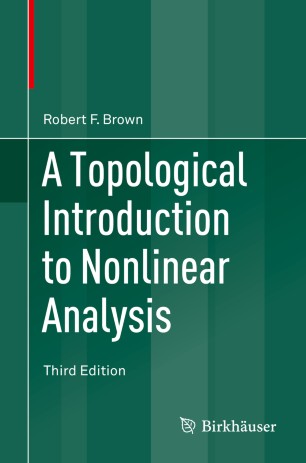 A Topological Introduction to Nonlinear Analysis

This third edition of A Topological Introduction to Nonlinear Analysis is addressed to the mathematician or graduate student of mathematics - or even the well-prepared undergraduate - who would like, with a minimum of background and preparation, to understand some of the beautiful results at the heart of nonlinear analysis. Based on carefully-expounded ideas from several branches of topology, and illustrated by a wealth of figures that attest to the geometric nature of the exposition, the book will be of immense help in providing its readers with an understanding of the mathematics of the nonlinear phenomena that characterize our real world.

For this third edition, several new chapters present the fixed point index and its applications. The exposition and mathematical content is improved throughout. This book is ideal for self-study for mathematicians and students interested in such areas of geometric and algebraic topology, functional analysis, differential equations, and applied mathematics. It is a sharply focused and highly readable view of nonlinear analysis by a practicing topologist who has seen a clear path to understanding.

"For the topology-minded reader, the book indeed has a lot to offer:  written in a very personal, eloquent and instructive style it makes  one of the highlights of nonlinear analysis accessible to a wide audience."-Monatshefte fur Mathematik (2006)

Robert F. Brown is a Professor of Mathematics at UCLA.  His research area includes algebraic topology that is included within topological fixed point theory. Professor Brown's most recent research concerns the fixed point theory of fiber maps of fiberings with singularities.

“The basic goal of this book is to explain, prove and apply a famous result in bifurcation theory called the Krasnoselski-Rabinowitz theorem. … a large portion of this book should be reasonably understandable even to upper-level undergraduates with a good real analysis course under their belts; certainly a beginning graduate student should find this book quite comprehensible, very informative, and enjoyable as well. The author deserves both congratulations and thanks for making such nontrivial mathematics so readily accessible.” (Mark Hunacek, MAA Reviews, February, 2015)