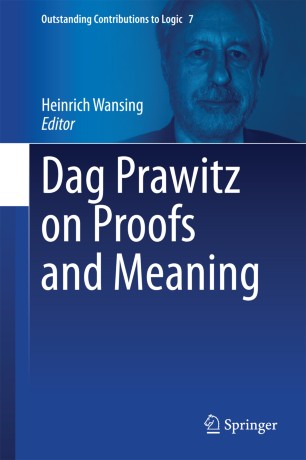 Dag Prawitz on Proofs and Meaning

This volume is dedicated to Prof. Dag Prawitz and his outstanding contributions to philosophical and mathematical logic. Prawitz's eminent contributions to structural proof theory, or general proof theory, as he calls it, and inference-based meaning theories have been extremely influential in the development of modern proof theory and anti-realistic semantics. In particular, Prawitz is the main author on natural deduction in addition to Gerhard Gentzen, who defined natural deduction in his PhD thesis published in 1934.

The book opens with an introductory paper that surveys Prawitz's numerous contributions to proof theory and proof-theoretic semantics and puts his work into a somewhat broader perspective, both historically and systematically. Chapters include either in-depth studies of certain aspects of Dag Prawitz's work or address open research problems that are concerned with core issues in structural proof theory and range from philosophical essays to papers of a mathematical nature. Investigations into the necessity of thought and the theory of grounds and computational justifications as well as an examination of Prawitz's conception of the validity of inferences in the light of three “dogmas of proof-theoretic semantics” are included. More formal papers deal with the constructive behaviour of fragments of classical logic and fragments of the modal logic S4 among other topics.

In addition, there are chapters about inversion principles, normalization of p

roofs, and the notion of proof-theoretic harmony and other areas of a more mathematical persuasion. Dag Prawitz also writes a chapter in which he explains his current views on the epistemic dimension of proofs and addresses the question why some inferences succeed in conferring evidence on their conclusions when applied to premises for which one already possesses evidence.

Heinrich Wansing is a professor of logic and epistemology at the Ruhr University Bochum (Germany). He is known for his work in philosophical logic, including the semantics and proof theory of modal, constructive, paraconsistent, many-valued and other non-classical logics. Moreover, he is the editor-in-chief of the book series Trends in Logic (Springer)

“Swedish logician and philosopher Dag Prawitz and his distinguished contributions to philosophical and mathematical logic are the focus of this book. … This is an excellent book, celebrating not only Prawitz’s career, but also a movement in the contrary direction of W. V. O Quine’s views against the so-called (somehow prejudicially) ‘deviant’ logics, and I cannot forbear from congratulating the editor for the distinctive choice of topics and for the general tone of the book.” (Walter Carnielli, Computing Reviews, May, 2015)