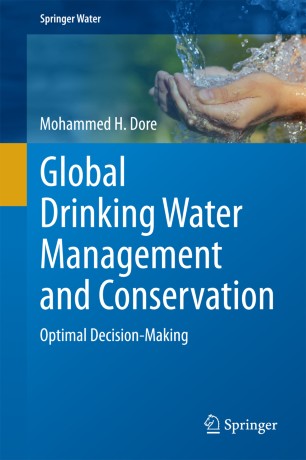 This book discusses different drinking water treatment technologies and what contaminants each treatment method can remove, and at what costs. The production of drinking water requires adequate management. This book attempts to fill the existing knowlegde gap about (a) water treatment technologies and their costs, (b) risk assessment methods, (c) adverse health effects of chemical contaminants, (d) management protocols, and varying regulatory practices in different jurisdictions, and what successes are possible even with small financial outlays. Addressing water consulting engineers, politicians, water managers, ecosystem and environmental activists, and water policy researchers, and being clearly structured through a division in four parts, this book considers theoretical aspects, technologies, chemical contaminants and their possible elimination, and illustrates all aspects in selected international case studies.

Mohammed Dore, who did his doctorate at the University of Oxford, UK, came to Brock University in 1981. He has received a number of research grants from the Social Sciences and Humanities Research Council of Canada, the National Science and Engineering Research Council of Canada, the Network Centre of Excellence in Canada, and the US National Science Foundation. With external funding he established his Climate Change Laboratory in 1996. The twin emphasis of his Lab has been training students to carry out high level policy oriented research that not only led to a number of theses but also to reports for various stakeholders who could implement the policy prescriptions. His research on climate change led him to drinking water policy issues. He has also worked as a consultant to both industry and government agencies; for example he has been hired as a contract consultant by Bell Canada; Environment Canada; Natural Resources Canada; The Municipality of Niagara; and the Capital Region District of Greater Victoria.