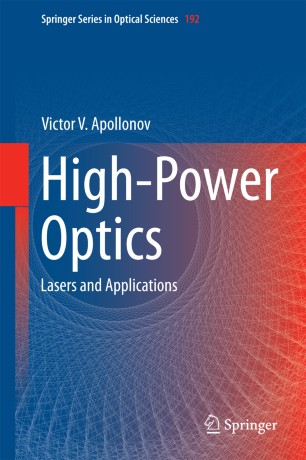 This book covers the basics, realization and materials for high power laser systems and high power radiation interaction with  matter. The physical and technical fundamentals of high intensity laser optics and adaptive optics and the related physical processes in high intensity laser systems are explained. A main question discussed is: What is power optics? In what way is it different from ordinary optics widely used in cameras, motion-picture projectors, i.e., for everyday use? An undesirable consequence of the thermal deformation of optical elements and surfaces was discovered during studies of the interaction with powerful incident laser radiation. The requirements to the fabrication, performance and quality of optical elements employed within systems for most practical applications are also covered. The high-power laser performance is generally governed by the following: (i) the absorption of incident optical radiation (governed primarily by various absorption mechanisms), (ii) followed by a temperature increase and response governed primarily by thermal properties and (iii)  the thermo-optical and thermo-mechanical response of  distortion, stress, fracture, etc. All this needs to be understood to design efficient, compact, reliable and useful high power systems for many applications under a variety of operating conditions, pulsed, continuous wave and burst mode of varying duty cycles. The book gives an overview of an important spectrum of related topics like laser resonator configurations, intermetallic optical coatings, heat carriers for high power optics, cellular materials, high-repetition-rate lasers and mono-module disk lasers for high power optics.

Apollonov V.V. is the leading specialist in the area of basic principles of creation and development of high power laser systems and high power radiation interaction with a matter.  He has made an outstanding input into creation and development of new branches of science - physical and technical fundamentals of high intensity laser optics and adaptive optics, investigation of physical processes in a high volume self-controlled discharges, creation of high power continuous wave, pulsed and high repetition rate pulse-periodic laser systems, high intensity laser radiation interaction with matter, application of  high power lasers for effective  protection of valuable objects and water surface cleaning, medical applications. Recent results of his investigations of laser diode arrays phase-locking, mechanisms of shock waves merging for a rockets launch by high repetition rate pulse-periodic laser light and super long conductive channel based on dust plasma by ablation are under very intensive implementation in our country and abroad.  He is the author of more than 650 publications and patents.
Apollonov V.V. is a high profile scientist and well known around all over the world, for more than 45 years of his international scientific activity, he has participated and organized more than 56 international conferences, symposiums and workshops, prepared more than 32 candidates and doctors of physics and mathematics. For the last 5 years his scientific group has fulfilled more than 60 R and D contracts with customers from Japan, UK, Germany, France, China, Korea, Singapore and USA. He is the General Director of “Energomashtechnika” Ltd.
Apollonov V.V. is the member of European and American Physical Society, SPIE, AIAA, American Society for QE and the member of    specialized scientific council of Russia. He is a full member of Russian Academy of Natural Science and Academy of Engineering Sciences, laureate of State Prize of USSR (1982) and of Russia (2001).